The Ultimate Guide to Pumpkin Patches in Terrebonne, Oregon

Nothing signals the coming of fall quite like spending the day at a pumpkin patch. It’s tough to not feel the cozy spirit of the season when you’re solving a festive corn maze while bundled up and sipping a hot apple cider. Pumpkin patches in Central Oregon benefit from our desert climate and still get plenty of sunshine, even in late October. While smaller family farms all around the region will sometimes host fall events, the two most popular pumpkin patches both reside in Terrebonne: the Smith Rock Pumpkin Patch and the DD Ranch Pumpkin Patch.

As the name suggests, this patch has unmatched views of the nearby Smith Rock formation, a popular area for hikers and mountain climbers. The Smith Rock Pumpkin Patch is owned and operated by the Smith Rock Ranch, a farm specializing in onion, carrot and grass seed, as well as hay, pumpkins and squash. The ranch is run by the Lisignoli family, one of the first families to start farming pumpkins in Central Oregon. Back in 1998, locals thought the family was crazy for trying to grow pumpkins, but their hard work has seriously paid off, as multiple generations of Oregon families have made it a tradition to spend their October here.

And why wouldn’t they? The Smith Rock Pumpkin Patch has activities that are sure to please everyone in the family, regardless of age. Among the main attractions are the pumpkin patch and the harvest market full of fresh farm produce, raw honeys, jams, decorations and more. The huge “Corn Maize” is also a fun activity, and has a theme that changes annually. This is also the only corn maze in the area, so don’t miss the chance to explore it.

Aside from the main draws, the Smith Rock Pumpkin Patch offers a Western shooting gallery, pony rides and horse-drawn carriages, pumpkin cannons, a petting zoo, barnyard putt-putt and even live music to be enjoyed as the sun sets over the ranch. 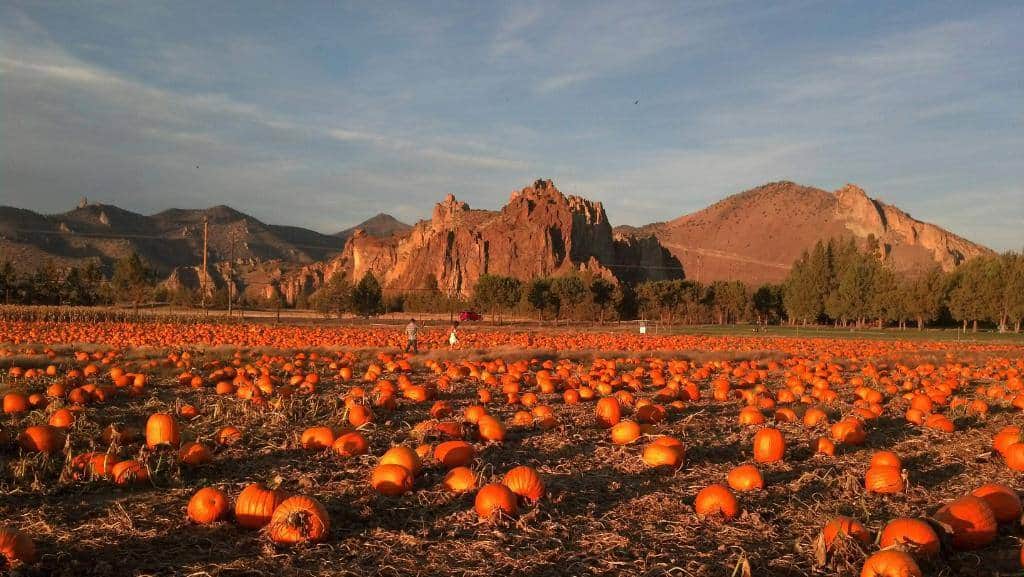 The Smith Rock Pumpkin Patch typically opens for the fall season Sept. 25, and remains open until the final day of the season. The pumpkin patch and harvest market are closed on Mondays but open every other day of the week. The other fall activities and the corn maze are only open Friday to Sunday. 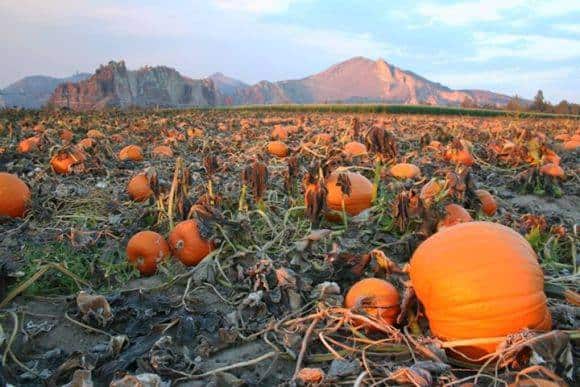 The DD Ranch Pumpkin Patch also sits near the base of Smith Rock and offers stunning sunsets over the rocks. Where the Smith Rock Ranch excels in farm-grown produce, the DD Ranch boasts some of the highest-quality meats around. None of their animals, from the cows and sheep to pigs and chickens, are raised with hormones, antibiotic feed or any other fillers. The ranch itself also swears to never use chemical herbicides, pesticides or fertilizers, in an effort to preserve the organic quality of their products. As a result, the DD Ranch market is full of high-quality, organic beef, lamb, pork, eggs and raw honey.

In addition to picking out a pumpkin at the DD Ranch, there are so many other activities the family will enjoy. These include pony and Clydesdale rides, a petting zoo, a hayride, the “Kids Korral” hay maze, a pedal go-kart course and a cowboy arcade where guests can shoot bows, bb guns and a massive slingshot.

The DD Ranch also has several food vendors offering a variety of options from hot dogs and burgers to kettle corn, popsicles, GF treats, beer and even cocktails. Treats for your furry friend are also available for purchase.

Just like Smith Rock Ranch, the fall festivities at the DD Ranch will open on September 25 and go until Halloween. The ranch is open from Tuesday to Sunday (closed Mondays) from 10 a.m. to 5 p.m. So as the leaves start falling and the cooler weather begins to settle in, pick an afternoon and head out to a Central Oregon pumpkin patch for some fall fun.