Breweries and Cideries in Bend, Oregon

Bend’s influence on the wider craft beer scene can hardly be overstated. Local brewers have gone on to open their own outposts all over the United States, our flagship ales and lagers make it into bottle shops and corner stores throughout the country, and visitors from around the world flock to our sunny city all year long for tastes straight from the tap.

Take a sip at any brew pub around town, and it’s easy to see why: Our local brewers have grown up in the industry, surrounded by some of the state’s best suds, where they learned from each other, brewed shoulder-to-shoulder, and saw a once-fledgling scene develop into a modern-day juggernaut that counts nearly two dozen breweries within city limits alone.

These days, the big-time beer scene around Bend can be a gift and a curse. It’s a gift, in the sense that there’s always good beer to be had—and it’s a curse, if only because there’s only so much time to enjoy it all. So as you discover Bend, Oregon, here’s how to get started exploring some of the city’s best breweries. 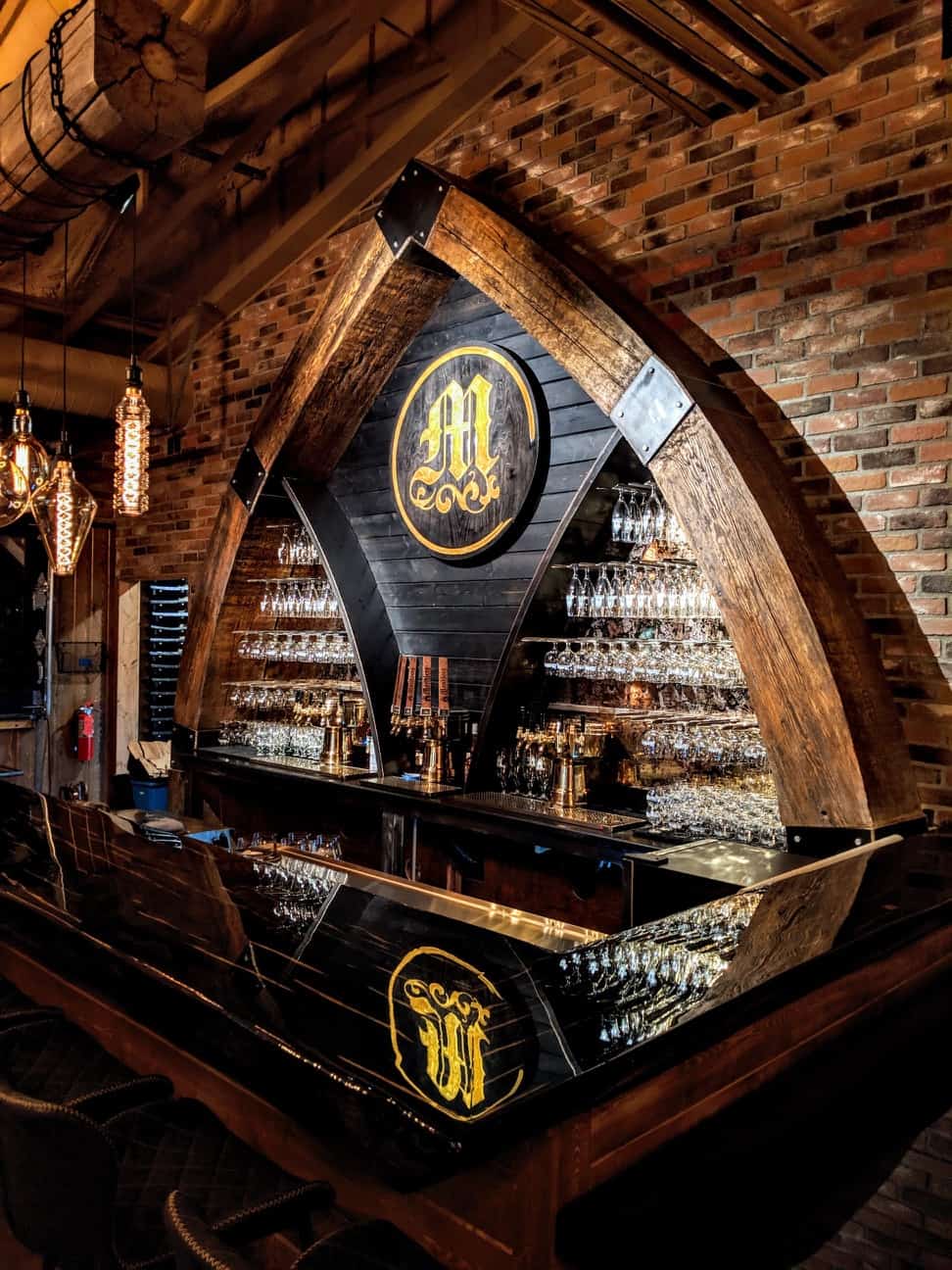 Truth is, we could write entire articles on each of the breweries in Bend; after all, you don’t open your doors and find success in such an esteemed beer market without bringing your “A” game to each batch. And while each are worth spotlighting, a few stand out for a variety of reasons—whether because they traffic in specialized ales or lagers, have developed a beloved flagship, or seem to have perfected recipes across the spectrum of styles. So while by no means comprehensive, here’s a guide to some of the best breweries in Bend, Oregon.

We can’t talk about the best Bend breweries without giving a nod to Crux Fermentation Project. The universally adored brewery is known for experimentation and backs that up with more than two dozen brews on tap at any given time—from a wide range of IPAs to flavorful lagers to a variety of barrel-aged offerings (including stouts, sours, and even the occasional pilsner). As if that weren’t enough, Crux even crafts a non-alcoholic IPA and its own cider. The beers pair well with an outdoor seating area; the brewery’s spacious lawn offers picnic tables, fire pits, and plenty of space to unfurl a picnic blanket—all while delivering spectacular views of nearby Cascade peaks.

On the west side of Bend, GoodLife Brewing has earned acclaim over the years for crafting some of the city’s favorite beers—including Sweet As! Pacific Ale, a refreshing beer bursting with citrus and pineapple flavors, and the well-balanced Descender IPA. The wood-paneled tasting room at GoodLife is adorned with images of Central Oregon’s outdoor landmarks, but the summertime beer garden out back hosts several picnic tables, lawn games, and food carts.

A few blocks north of GoodLife, Boss Rambler Beer Club has taken Central Oregon by storm since opening in 2018. Even as one of the region’s newer breweries, Boss Rambler has already won numerous awards and is quickly becoming known for its light, yet flavor lagers; creative sour ales; and dialed-in IPAs that boast tropical and citrus notes. (Boss Rambler’s appeal even goes beyond beer: Its boozy slushies are a hit on hot summer days.) 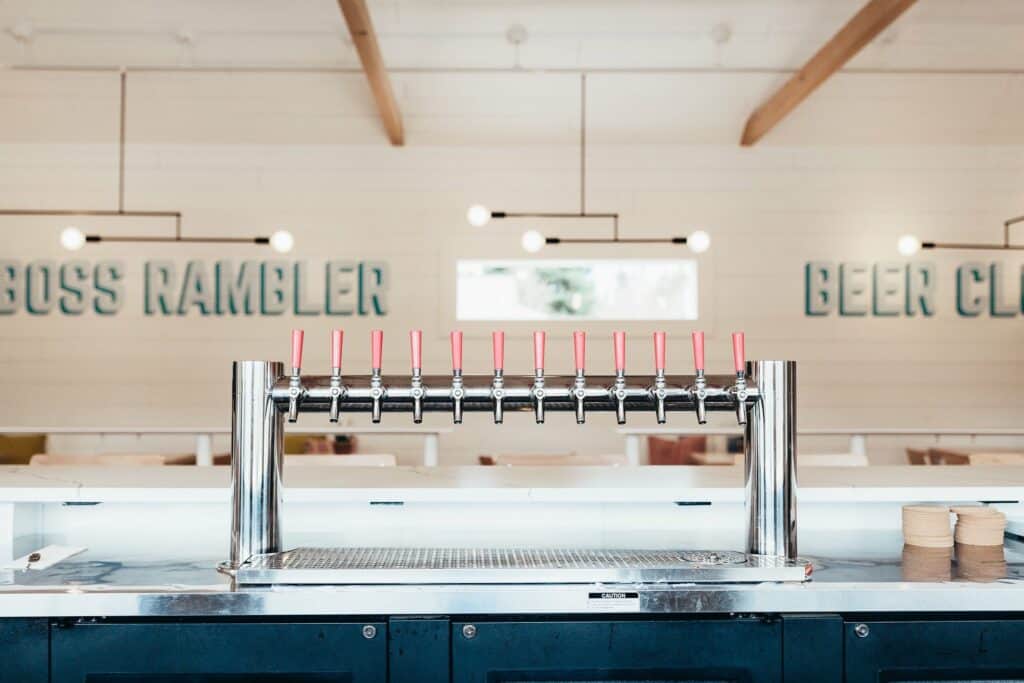 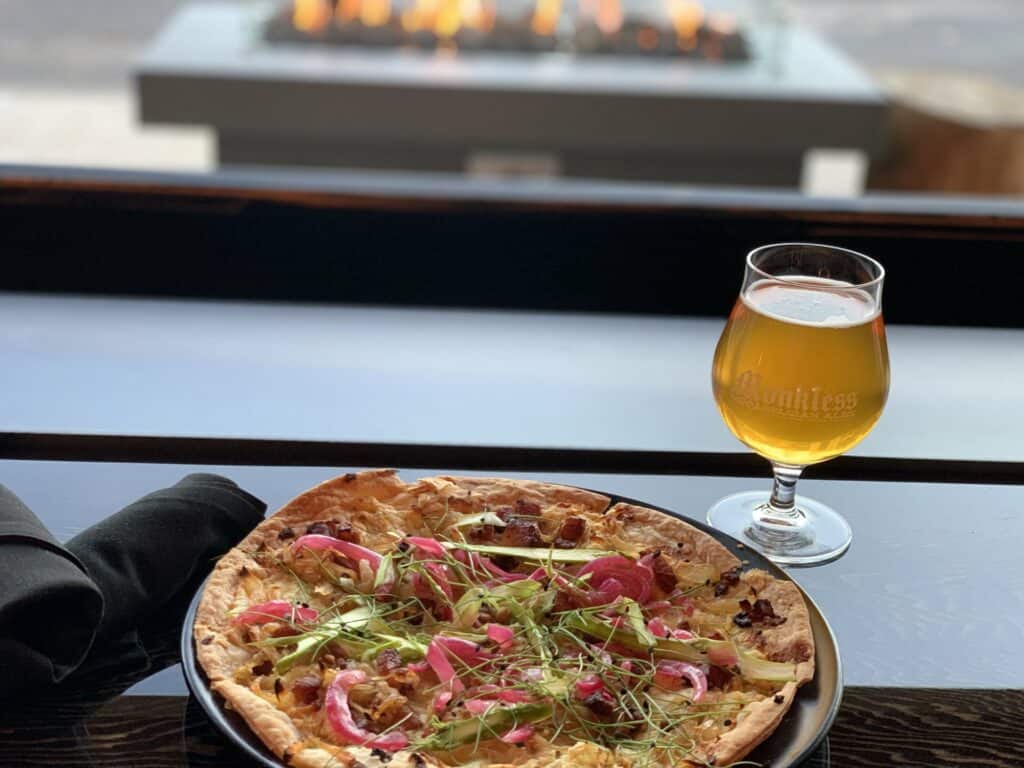 Hopheads need not apply at Monkless Belgian Ales, which bypasses our region’s collective love of IPAs for an approach that finds inspiration in old-world Belgian ales. As one of the few breweries in Oregon to focus largely on Belgian styles, Monkless has earned a devoted following for its award-winning wits and sweet, yet easy-drinking dubbels and tripels; when the holidays arrive, keep an eye out for the brewery’s winter ale (named Friar’s Festivus), boasting notes of caramel and dark fruit. Fair warning: Monkless’ beers pack a punch, with higher-than-average alcohol content, so be sure to enjoy responsibly.

Another pioneer in Bend is Boneyard Beer, which started in 2010 with equipment collected from 13 breweries throughout the United States—hence the name. More than a decade later, Boneyard crafts a wide range of styles—but is best known for its RPM IPA, which can be found in almost any bar throughout Central Oregon; the popular IPA boasts subtle notes of pine, citrus, and grapefruit for a balanced flavor profile. Most recently, Boneyard entered into a partnership with Deschutes Brewery will (among other things) help RPM IPA find an audience beyond our region.

Chances are good you’ll get hungry at some point while brewery-hopping around town. Stay sated with some help from our page on restaurants in Bend, Oregon.

You’ll find breweries all over Bend—but an unusually high concentration in downtown makes the walkable district an especially appealing destination for your next beercation. In all, six brew pubs sit within an easy walk of each other—and while we can’t list every last stop, here’s a quick overview of what you’ll find as you bounce between breweries in downtown Bend.

It was in 1988 that Gary Fish turned an old law office in downtown Bend into what would become the home of Deschutes Brewery. The craft brewery, one of the state’s largest, has since moved most of its operations to a production facility on the west side of town—but its old-school pub is well worth a visit. You can’t go wrong with a crisp Bachelor Bitter, available exclusively at Deschutes’ pubs, but its nearly two dozen taps range from juicy, pine-tinged IPAs to fruity sours.

A few blocks away, hugging the banks of the Deschutes River, is Bend Brewing Company. The second-oldest brewery in Bend opened in 1995 and remains a local favorite, more than 25 years later, for nailing a wide range of styles—including an award-winning sour ale, an earthy English IPA, and a crisp amber ale. The brewery’s outdoor space, with picnic tables and fire pits along the Deschutes River, is always a popular place to hang out on sunny afternoons.

At the northern edge of downtown Bend sits the city’s third-oldest brewery, Silver Moon Brewing. The mainstay of the local craft beer scene has earned plaudits over the years for crafting creative variations of classic styles—including a mango pale ale and a raspberry porter—and is home to a spacious back patio that hosts a bustling food cart pod.

And at the southern edge of downtown, McMenamins Old St. Francis School whips up balanced ales and lagers in a former Catholic schoolhouse that dates back to 1936. Today, you can enjoy McMenamins’ classic offerings in one of five on-site bars and restaurants, while catching a flick at the pub’s theater, or in one of the school’s 41 guestrooms.

While you’re in the area, keep in mind that downtown has an active nightlife scene—so check out our bar guide to Bend, Oregon, to keep the party going. 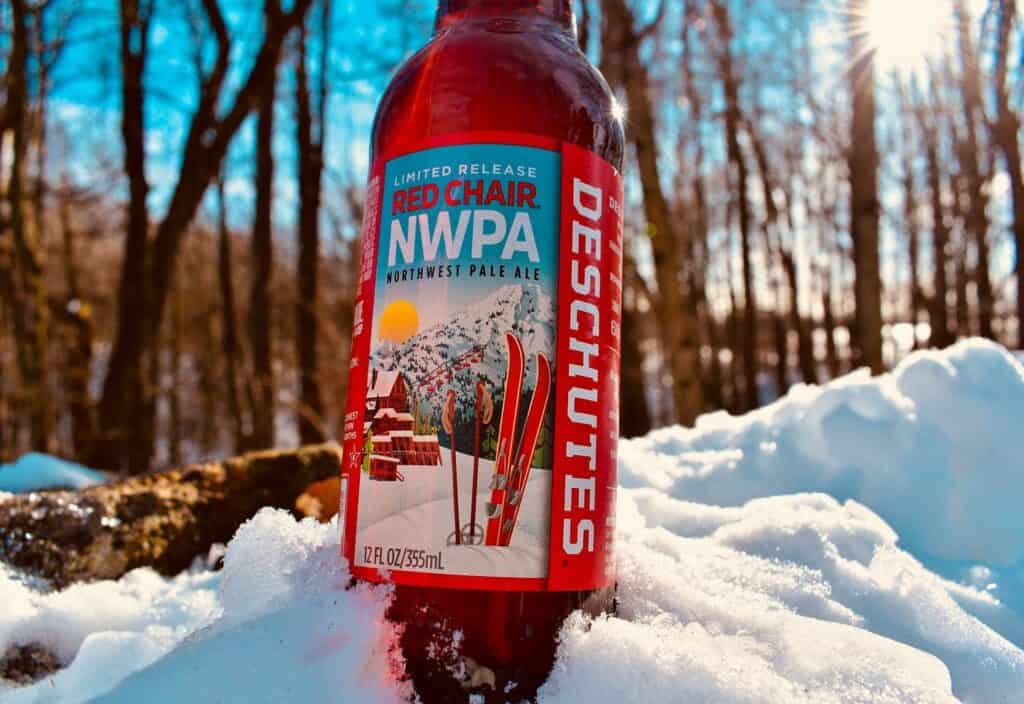 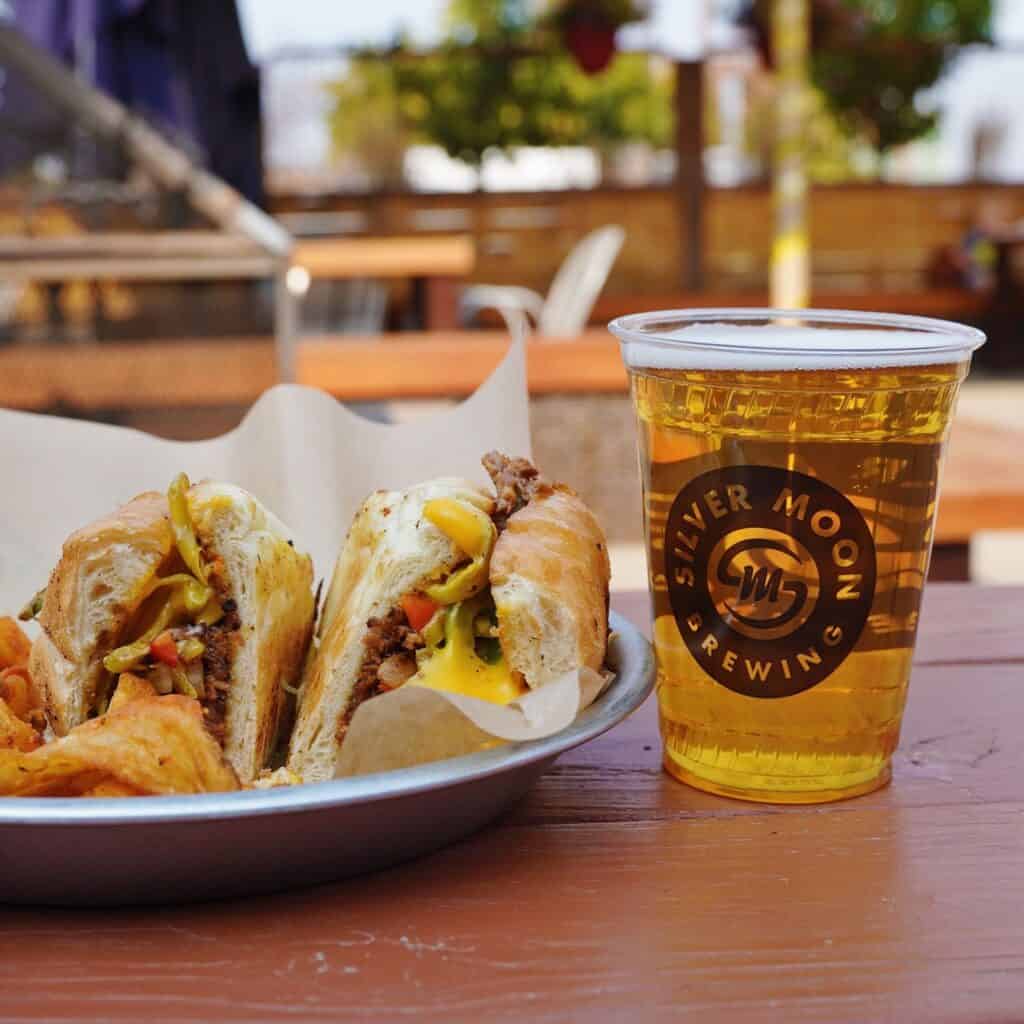 Craft beer might get most of the love around Bend, but the city’s craft beer scene is nevertheless robust. Here’s a guide to some of the best cideries in (and around) Bend. 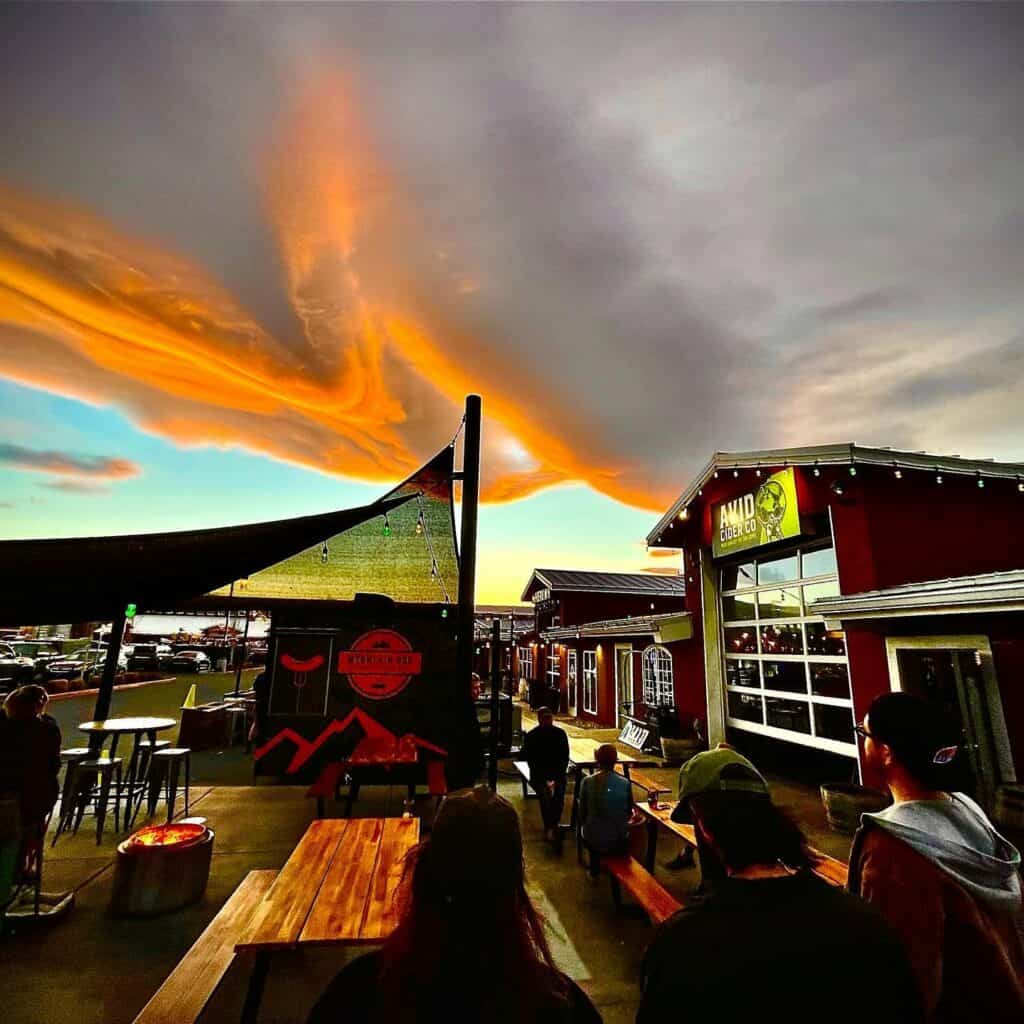 Avid Cider Co. launched in 2013 and is today Central Oregon’s oldest craft cider maker. Take a look at Avid’s ever-changing tap list, and you’ll likely notice that most of its offerings incorporate fruits other than apples—such as blackberries, currants, and lemons—and that’s by design. When he opened Avid, founder Dan McCoy wanted to showcase some of the unique fruits that grow around the Pacific Northwest while trying to find a balance with crisp, clean apple flavors. Experience the wide range of flavors for yourself at the Avid tasting room just south of downtown Bend.

Roughly 15 minutes north of town, a pair of breweries call the community of Tumalo home. Tumalo Cider Company, which opened in 2014, has made a name for itself by leaning into dry and semi-sweet ciders that eschew cloying, sugary flavors for a more balanced approach; some of the cider maker’s most popular flavors include a huckleberry lemon cider and a slightly tart raspberry cider.

Just around the corner, Bend Cider Company is the new kid on the block, having opened in late 2019; the nascent cider maker trends toward dryer flavors and incorporates unusual ingredients into its ciders—including açaí berry juice, Oregon juniper berries, and sustainably farmed ginger.