Mt. Bachelor has gone by many names over the years: It was originally called Bachelor Butte, a cheeky name playing off the peak’s separation from the Three Sisters, and was later given its current moniker after a ski resort opened on its powdery slopes in 1958. Today, most of us simply know it as “Bachelor.”

Whatever you call it, the 9,070-foot peak, a quick half-hour from downtown Bend, isn’t just a winter ski resort or summertime bike park; it’s a Central Oregon icon, as famous to locals and visitors alike as our renowned craft beer scene or the meandering Deschutes River.

More than 60 years since opening, Mt. Bachelor today is the sixth-largest ski resort in North America and the largest in the Pacific Northwest. With a season that begins as early as November and runs through Memorial Day, Mt. Bachelor Ski Resort hosts 4,323 skiable acres, offers 360º skiing from the summit, boasts 3,365 feet of vertical drop, and counts more than 100 runs—making it a premier destination for skiers from all over the world.

The fun doesn’t end when the snow melts, either: Come summer, Mt. Bachelor hosts downhill mountain bike trails, zipline rides, scenic chairlift rides, hiking trails, a challenging disc golf course, and more. So no matter when you’re visiting, here’s a look at year-round fun at one of the most iconic resorts in Central Oregon. 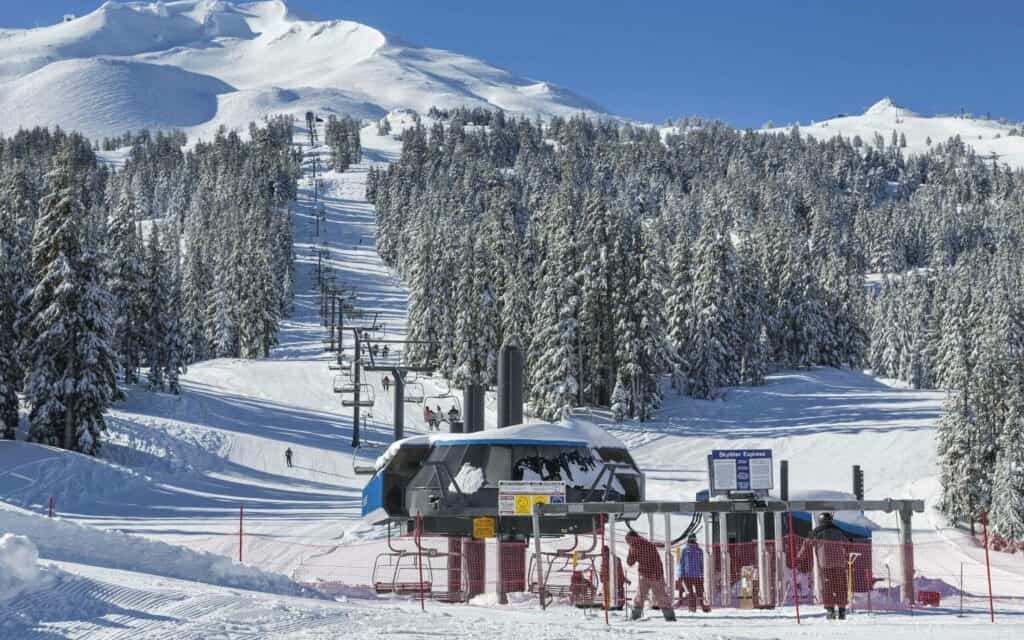 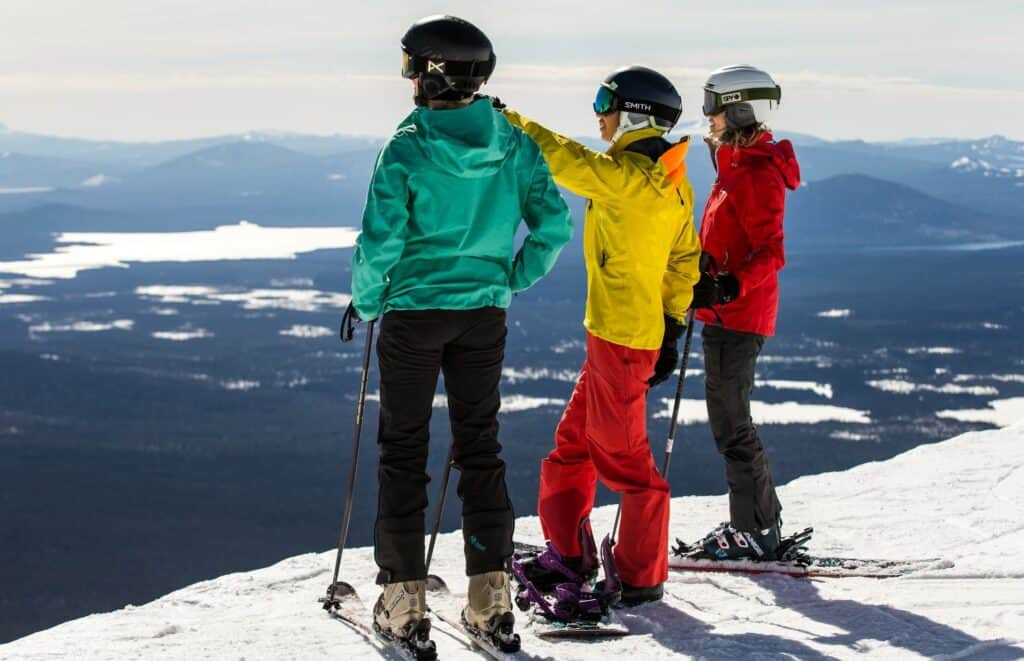 Situated on the eastern slopes of Mt. Bachelor—and receiving an astounding 462 inches of snow per season—the resort has become famous since opening in 1958 for its powdery runs, long seasons, and bluebird days. Here’s what to expect come winter: 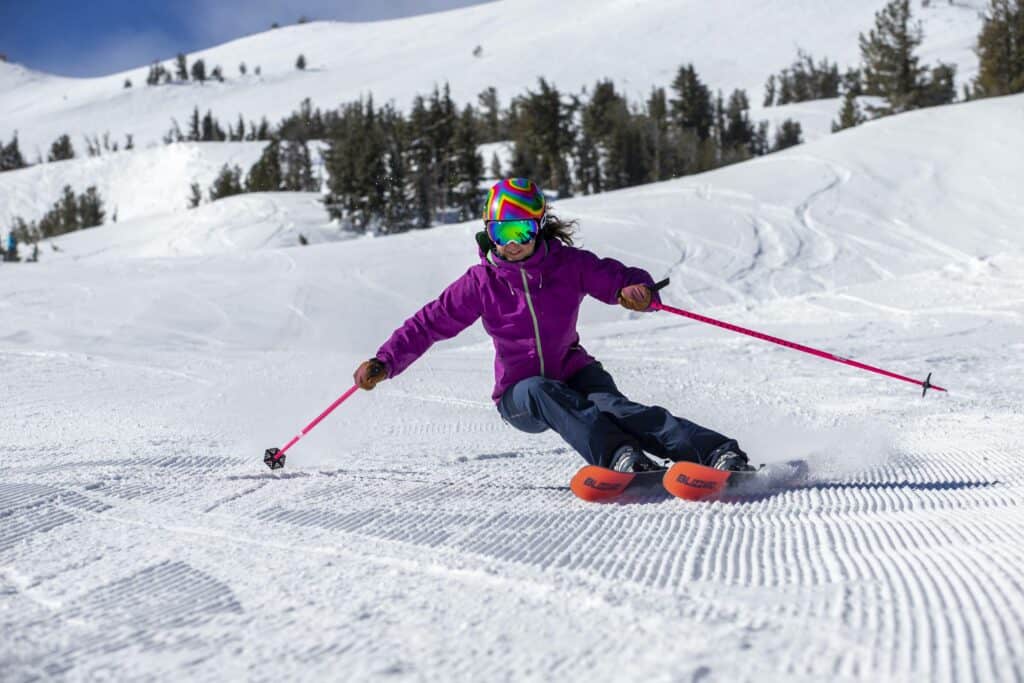 Amenities at Mt. Bachelor: You won’t find slopeside lodging, high-end base villages, high-priced rental homes, or other features that have taken over ski areas throughout North America in recent years. Rather, the focus at Mt. Bachelor is all on the mountain itself—which means the resort’s offerings are designed to help get you onto the lift as quickly as possible. You’ll find downhill and cross-country rental equipment (ranging from single-day rentals to season-long leases), an on-site shop with apparel and outdoor equipment, and three après-ski dining options throughout the resort.

Wide range of attractions and offerings: Mt. Bachelor might boast more than a half-mile of vertical drop, but its attractions and offerings go far beyond the downhill fun. The resort offers 56 km of groomed cross-country skiing trails, snowshoe tours with U.S. Forest Service rangers, a popular tubing park (served by a tow lift), and even sled dog rides. 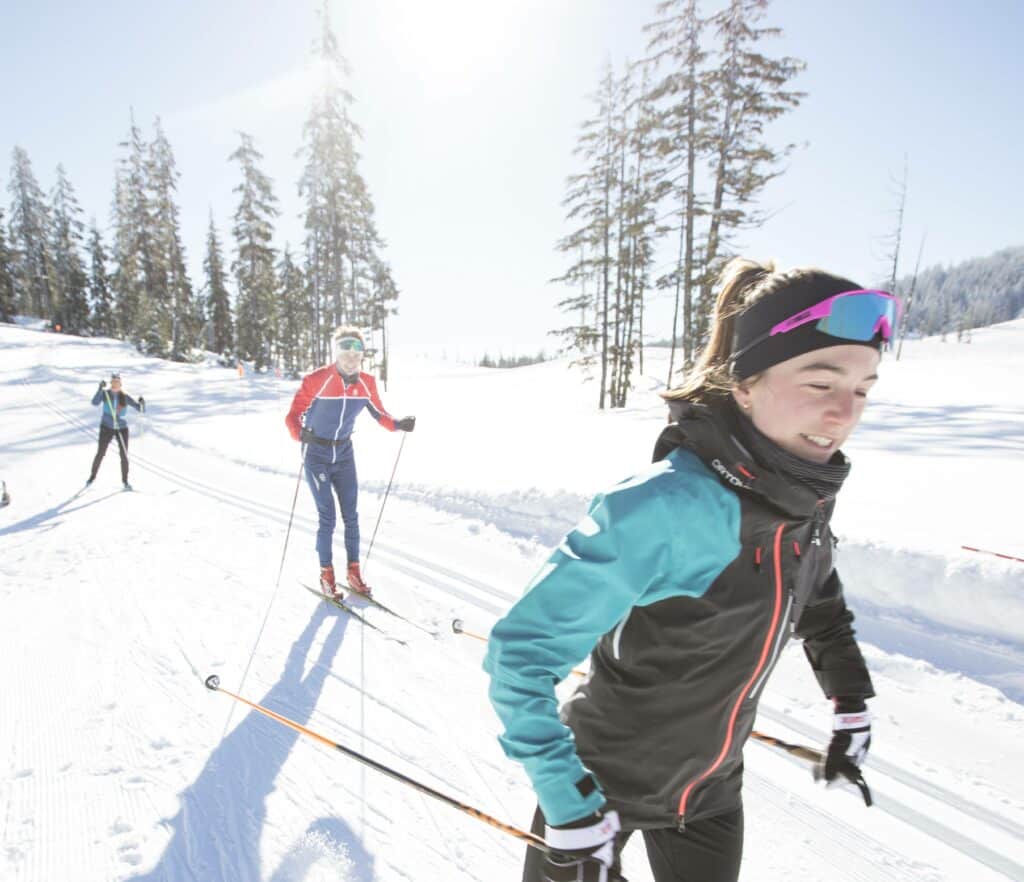 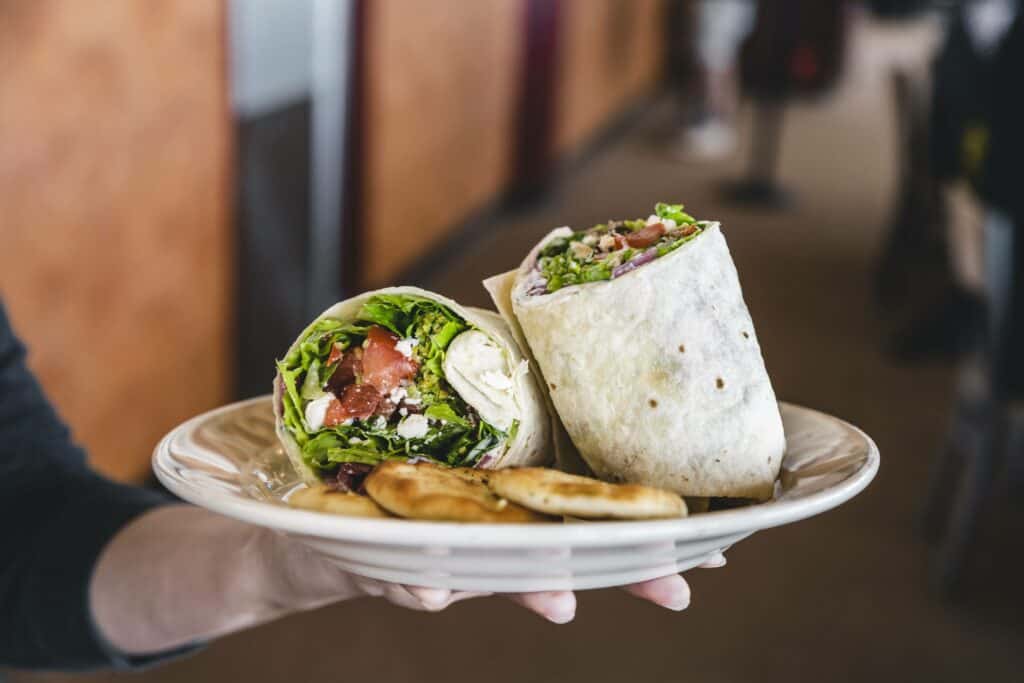 Food and drink: No matter the season, you’ll find plenty of food and drink options on Mt. Bachelor. After a day outdoors, Clearing Rock Bar at West Village Lodge serves a filling menu that includes burgers, sandwiches, salads, and other fun fare. (An outdoor fireplace makes it an especially appealing stop for skiers and snowboarders before hopping back on the lift.) Further up the mountain, Scapolo’s Bistro in Pine Marten Lodge (one of the highest-elevation eateries in Oregon) offers a menu of light, Mediterranean-inspired fare that won’t weigh you down; popular selections include salads, flatbreads, rice bowls, hot sandwiches, and a wide variety of beer, wine, and soft drinks. Both eateries pair their bites with sweeping views of surrounding forests and Cascade peaks. The XC Café, meanwhile, is based in the Nordic Lodge and serves a variety of hearty burritos; its on-site fireplace is a fun spot to unwind with hot chocolate after a day on the trail. And if you need a piping-hot beverage in the heart of winter, you’ll find four locations of the resort’s Pinnacles coffee stands throughout Mt. Bachelor. You’ll also find five food carts slinging burritos, artisan bowls, barbecue, dumplings, and more—all from local vendors.

Mt. Bachelor sits within the Deschutes National Forest—and is surrounded by 2 million acres of lush wilderness—so you won’t find any overnight accommodations at the resort’s lodges. But you’ll still find plenty of options for a good night’s sleep nearby.

And whenever you visit, the resort hosts several RV sites (some with power) for guests who spent all day hiking, mountain biking, and ziplining on the mountain—but who aren’t quite ready to return to civilization just yet.

If you’d rather relax in a bed that isn’t your own, two of Central Oregon’s most popular destinations sit just a half-hour away—and offer a wide range of lodging options for all four seasons.

Discover Bend, Oregon, for all manner of accommodations—from hostel bunks to upscale hotels in the heart of downtown—that cater to groups of all sizes and offer easy access to the city’s many attractions. Best of all: Several lodgings help with shuttle service to make your next trip to the mountain as smooth as your time on the mountain.

To the southeast, visit Sunriver, Oregon, for resort-style digs that accommodate families, large groups, and all your gear. Once you’re off the slopes and back at your room, the cozy community hosts wintertime attractions, several boutique shops, refreshing brewpubs, and family-friendly restaurants to help make the most of your stay. And if you have energy to spare, learn more about things to do in Central Oregon. 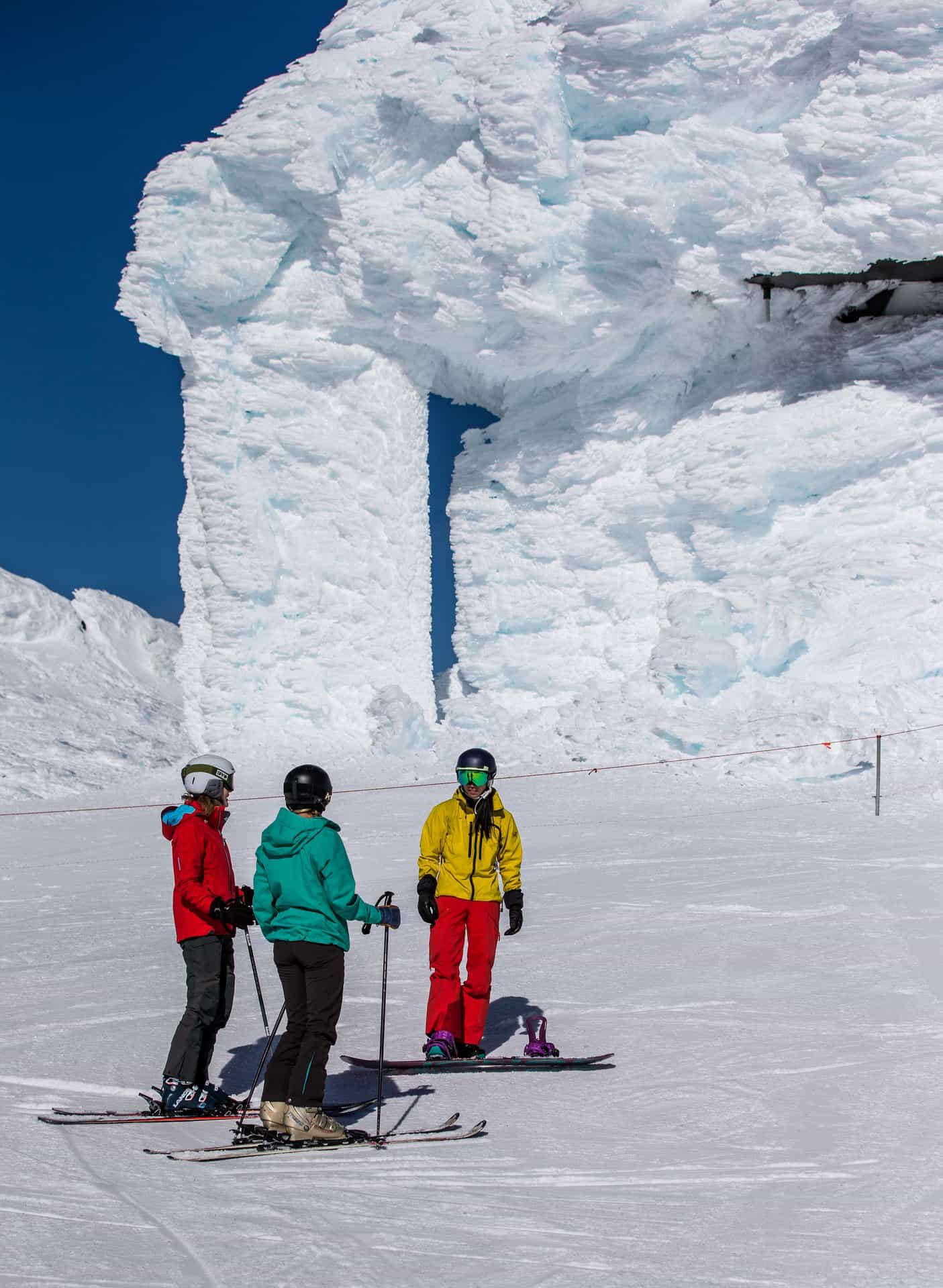 For some, the fun at Mt. Bachelor doesn’t begin until after the snow melts. Whether you’re looking for an epic mountain bike ride or want to enjoy sweeping views from the comfort of a chairlift, Mt. Bachelor has plenty to enjoy all summer long. Here’s a sampling of the resort’s seasonal offerings. 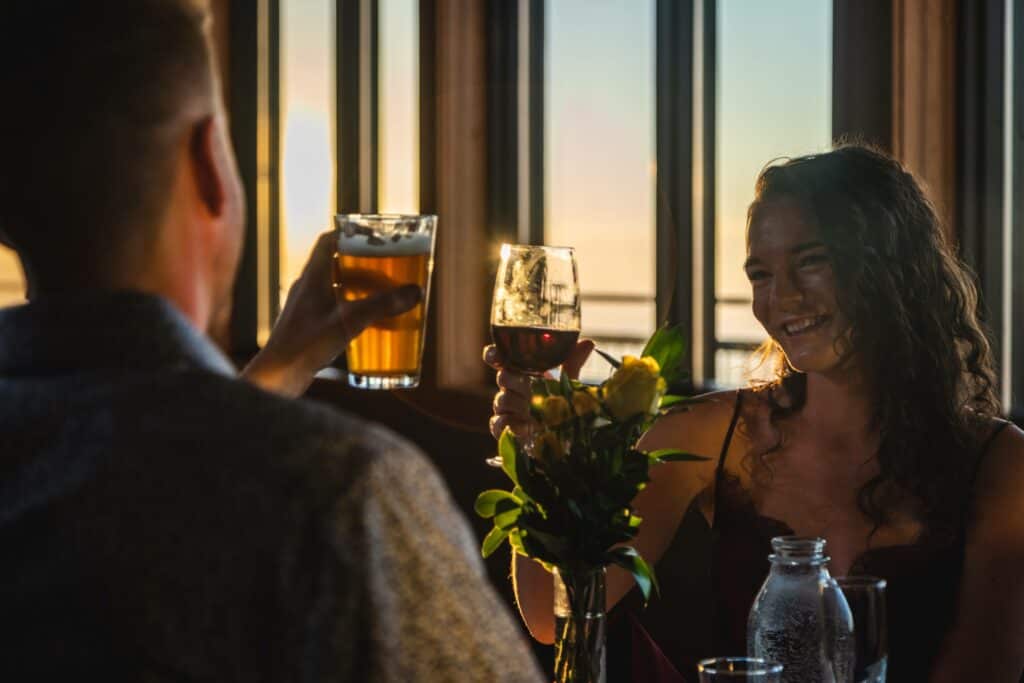 Sunset Dinners at Pine Marten Lodge: How often does a chairlift whisk you away to dinner? It’s a regular occurrence every summer on Mount Bachelor, where sunset dinners are offered each weekend at an elevation of 7,800 feet. The prix-fixe menu draws its inspiration from the Pacific Northwest, with dishes ranging from steak and ribs to risotto and salmon, and the drink menu includes a variety of wines, creative cocktails, and local brews.

Mt. Bachelor Bike Park: Mountain biking is big in Central Oregon—after all, the region boasts more than 300 miles of singletrack trails—and Mt. Bachelor has gotten in on the fun with its own popular riding area. The Mt. Bachelor Bike Park features more than 12 miles of downhill trails (all served by a lift) that pass through ponderosa pine forests and volcanic terrain. Its paths are suited to riders of all skill levels, and a suite of services—including rentals, repair services, clinics, and lessons—rounds out the experience for a full day of fun. (Want to shred trails elsewhere in the region? Check out our page about mountain biking in Central Oregon.) 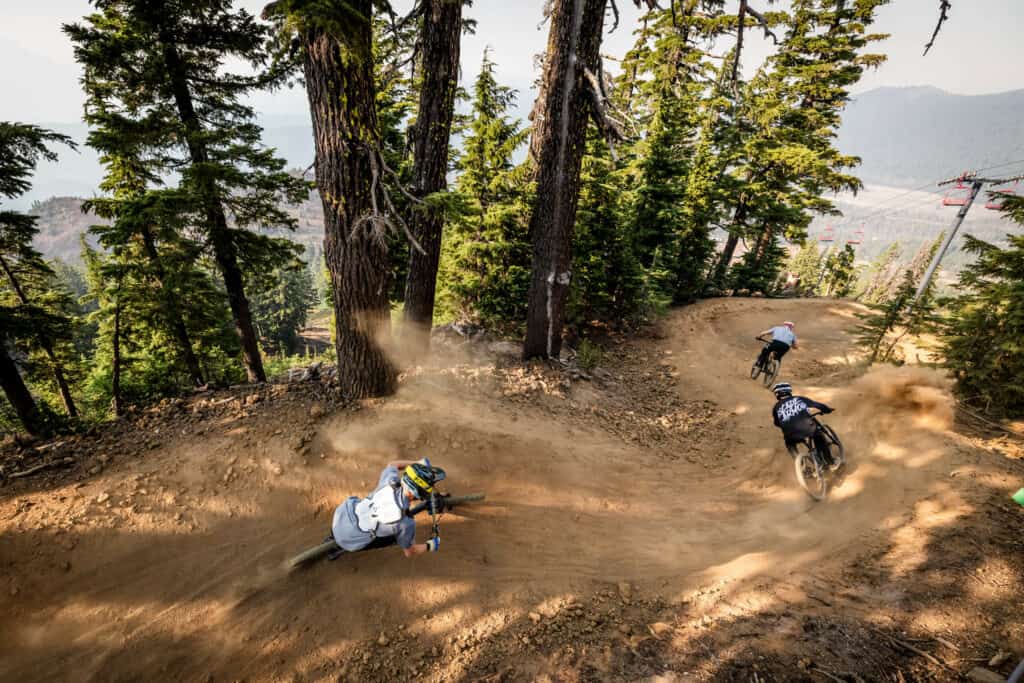 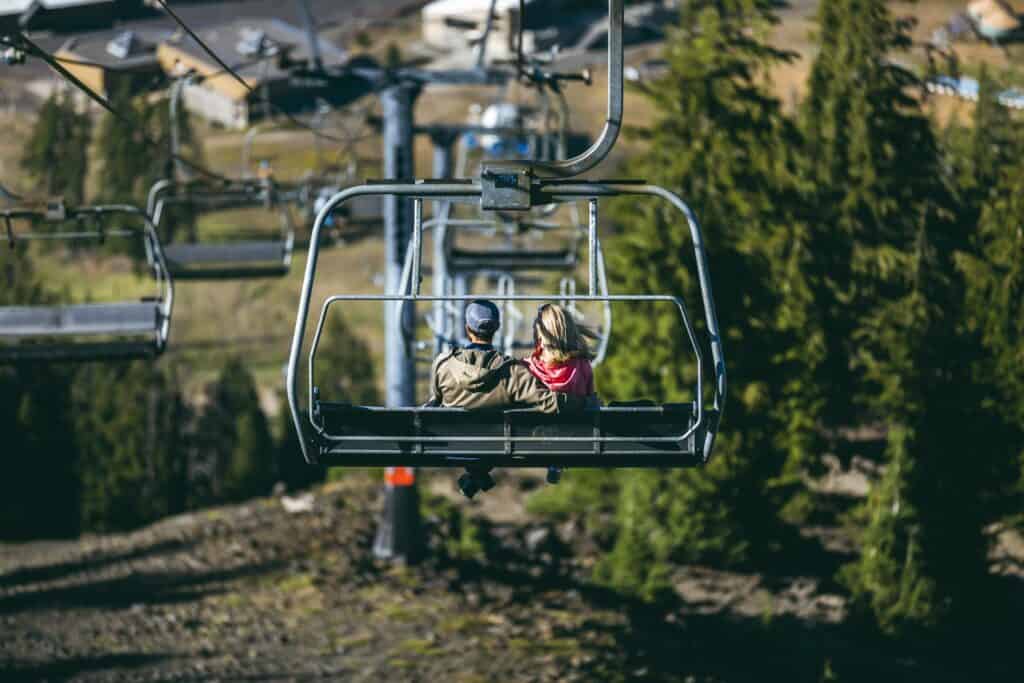 Scenic chairlift rides: Not up for a thigh-burning hike or heart-pumping mountain bike ride? Kick back with a scenic chairlift ride to Pine Marten Lodge; along the way, you’ll gain 1,500 feet of elevation while enjoying dramatic views of nearby peaks, rocky lava flows, and the massive Deschutes National Forest. Once at the lodge, you can enjoy a snack or drink, hike back down, or even get a game going on the resort’s 18-hole disc golf course.

Zipline tours: Who says you can’t have a downhill adventure in summer? Mt. Bachelor Zip Tour offers zipline rides that begin above the trees at the Pine Marten Lift before dropping nearly 1,400 vertical feet. It’s among the steepest and fastest zipline rides in the Pacific Northwest, but riders can choose a speed to their liking and ride with friends on side-by-side lines. If you can catch your breath on the way down, watch for the likes of Tumalo Mountain and South Sister in the distance. (Jonesing for more information on the many peaks around our region? Learn about the mountains of Central Oregon.) 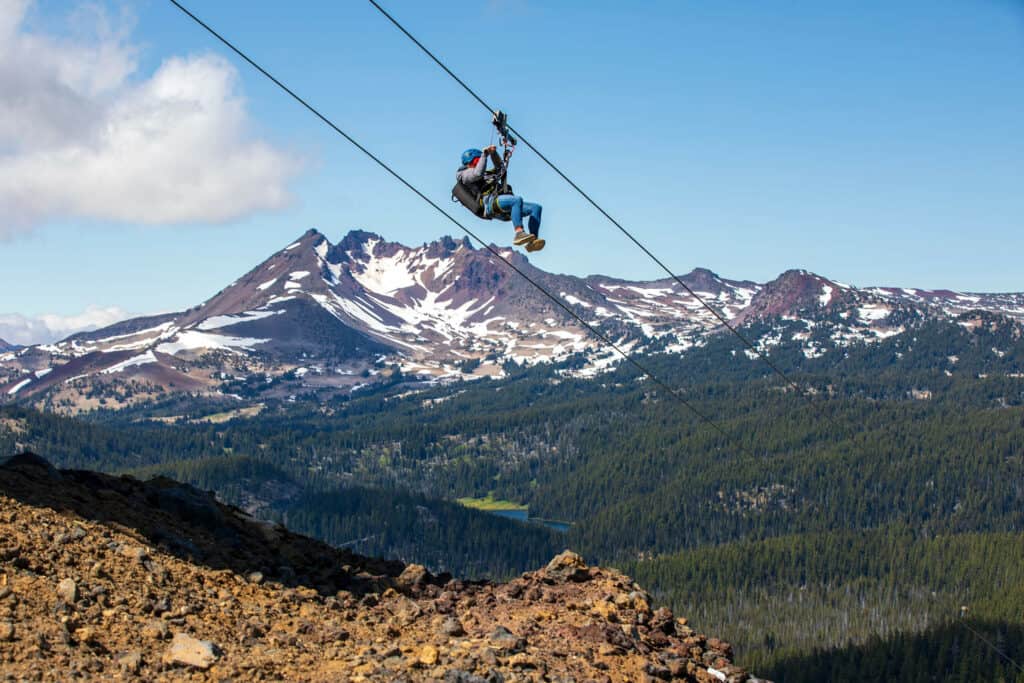