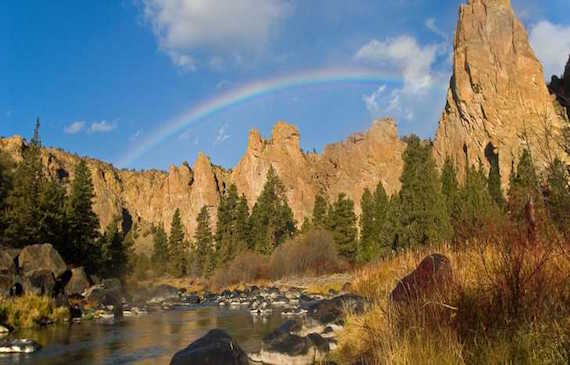 No trip to Central Oregon is complete without a visit to Smith Rock State Park. It is an Internationally-famous rock climbing area with 7 miles of hiking trails and climber access routes.

If you enjoy scenic views of deep river canyons or rock climbing, Smith Rock State Park is the place for you. There are several thousand climbs in the park. More than a thousand are bolted routes. We also offer miles of hiking and mountain biking trails. Along your trip through the canyon, you might see golden eagles, prairie falcons, mule deer, river otter and beaver.

Around 30 million years ago massive amounts of ash and debris resulting from the eruptions of nearby volcanos filled the caldera and hardened into rock. Smith Rock Tuff–the largest rock formation on the western rim was the outcome, creating massive walls and spires up to 550 feet. Flows of basalt lava then poured into the area over half a million years ago from vents almost 50 miles away, creating the cap on the tuff in the caldera.

The Crooked RIver then made its way through the rock layers to carve the features seen today. At 3200 feet high, the Smith Rock ridgeline rises 600 feet above the river gorge below. The picnic and campgrounds sit on top of the rimrock, which is made up of columnar basalt. Between 1960 and 1975 a combination of purchases and gifts of land finally formed the park as we know it today. Smith Rock State Park put on the map by the rock climbing community, it now attracts over 800,000 visitors a year from around the world.

Due to the uniqueness and fragile aspect of the park, park rangers enforce the animal leash law and strongly encourage all park users to stay on trails.