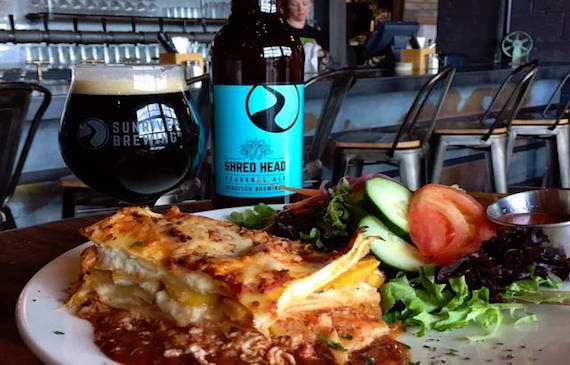 At Sunriver Brewing Company we love our beer. In a region that has taken craft beer to a whole new level, we pride ourselves on brewing awesome craft beer that includes the lighter side of brewing as well as the killer hoppy fare.

We’re just as proud of our outrageous service. Great beer needs to be shared. We’re positioned to do just that here in Sunriver and beyond. Whether we’re serving customers at one of our Sunriver Brewing Company pubs or working with our distributor partners and their outlets, our awesome beers are brewed to be relished. You’ll crave our high-quality, easy-drinking beer and we’ll do whatever it takes to share the love.

The Sunriver Brewing Company originally began in The Village at Sunriver as a family-owned pub that served great food and brewed its own beer. Since its launch in 2012, demand for our beer has increased and we’ve continued to expand production to meet that demand.

Sunriver Brewing Company is dedicated to providing exceptional food and service in a fun atmosphere in the Sunriver Village in Sunriver and also at the Galveston Pub in Bend, Oregon. They showcase their own handcrafted beer as well as a few other Central Oregon favorites.

We love our beer. In a region that has taken craft beer to a whole new level, we pride ourselves on brewing awesome craft beer that includes the lighter side of brewing as well as the killer hoppy fare.

Our awesome craft beer is rivaled only by our outrageous service which extends from our Sunriver brewpub to the distributors and outlets that sell our brew. The folks who work at Sunriver Brewing Company are about the best you can find anywhere on the planet. We care about what we do, we care about the people in our community and we care about each other.