Notable Chefs at the Best Restaurants in and around Bend, Oregon 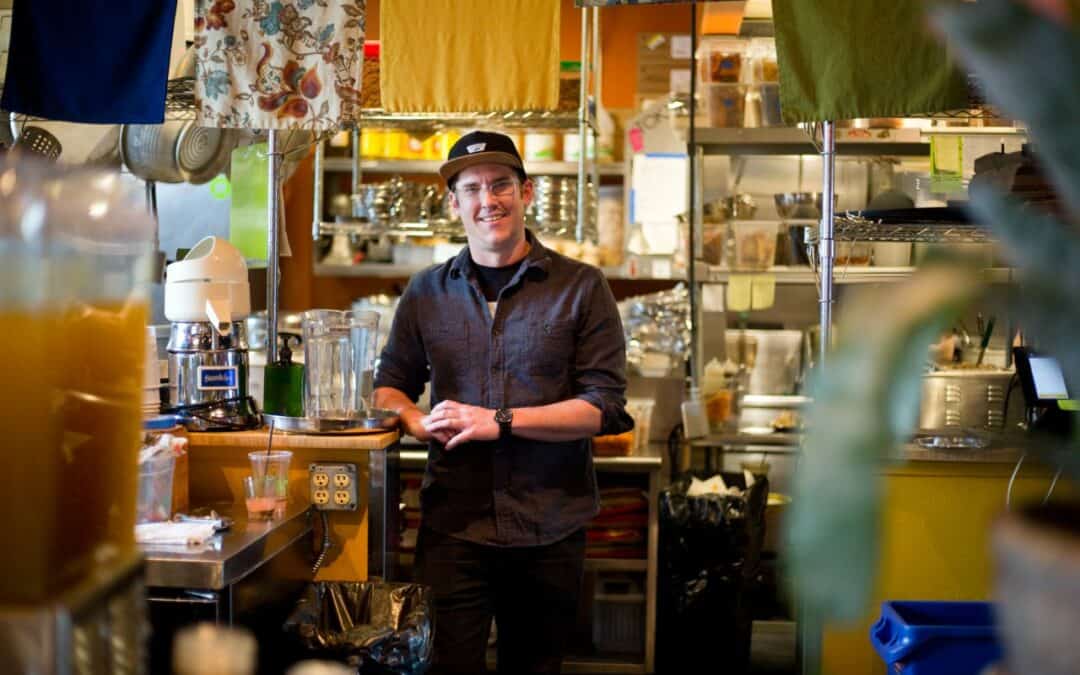 Notable Chefs at the Best Restaurants in and around Bend, Oregon

A little known fact that visitors are picking up on, Bend is a foodie paradise. There’s something about our creative, non-traditional attitude and emphasis on local ingredients that just makes great food. Luckily for visitors and locals alike, there are several chefs running Bend kitchens that constantly push boundaries, experiment, and create delicious and innovative dishes across a diverse array of cuisines.

The international cuisine served at Spork, like lomo saltado, tacos and tomato peanut curry, is inspired by the head chef and owner’s travels across the globe. Jeff Hunt takes these various flavors and masterfully combines them in culture-crossing dishes that the New York Times has called “culinary magic.” The restaurant itself has a vibrant West Coast design combined with motifs from around the world: Tibetan prayer flags and photos from South Asian and South American travels line the space on the walls that have not already been covered in greenery.

Before gaining a permanent location, Spork was one of the top-rated food carts in Bend for several years. From their opening in 2013 to now, the restaurant has one several first-place awards and runner-up places in “best of” contests from local newspaper The Source Weekly, such as best chef, best lunch spot and best casual dining. 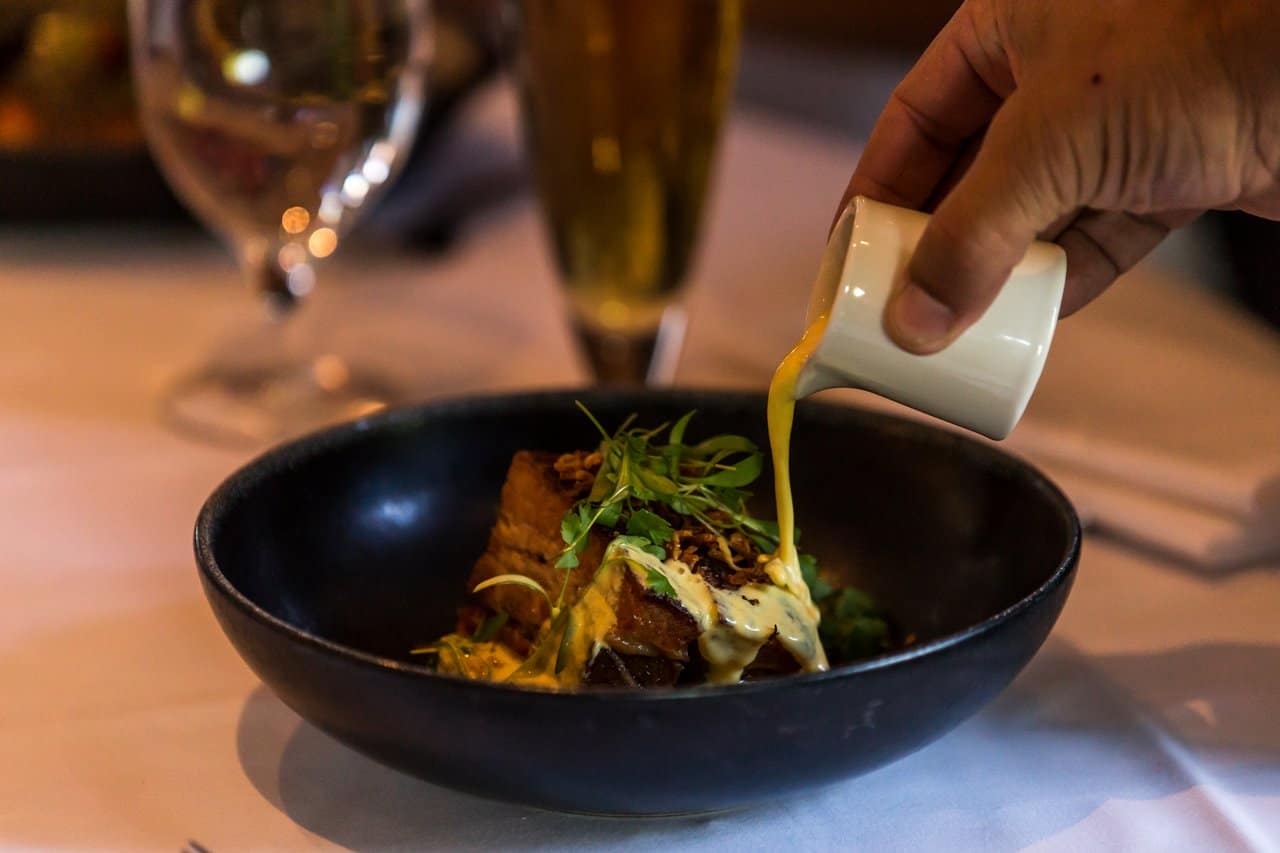 Ariana and her husband Andres Fernandez own and operate Ariana, an upscale restaurant described as Northwest cuisine with a Mediterranean flare. Chef Ariana brings her Italian roots into the kitchen with dishes like Sicillian calamari. The restaurant opened in 2004 when the husband and wife duo explored their chemistry in the kitchen, and Ariana’s parents offered to help fund the opening of the restaurant that would become one of Bend’s favorites.

Dishes at Ariana are always rotating and changing, based on what local ingredients are available seasonally. According to chef Ariana, the restaurant’s flavor has evolved overtime to truly reflect the flavors that surround them in Central Oregon. The duo describe themselves as “modern Americans who really enjoy Central Oregon and creating eclectic seasonal moments.”

Wild Rose is one of three restaurants owned by the Itti family from Thailand, and it has become a Bend-staple over the last few years. The food is specifically Northern Thai, which is traditionally a very rural cuisine and includes sticky rice, a variety of stir fry and curry noodle dishes, and tons of opportunities to snack on crispy pork and chili paste; you won’t find any pad Thai, chopsticks or Sriracha sauce here.

The chef and owner Paul Itti encourages diners to step out of their comfort zone and try something new. Itti himself hails from Northern Thailand, and brings with him a level of authenticity that is nearly unmatched. He has stated that the recipes he serves up at Wild Rose are what he cooks for himself and his family at home. Instead of inquiring about pad Thai or something with peanut sauce, he recommends going for the creamy, egg noodle soup called khao soi, a dish so popular it has developed a local cult following. Their website states “nothing haunts us like the things we didn’t order,” and the attitude is carried over in the restaurant which features dishes meant to be sampled and shared as a family. At the end of the day, Itti and the chefs at Wild Rose will cook the food exactly as they would cook it at home, with decades of experience in perfecting their recipes. It’s no wonder why Bend Magazine readers called them “the best takeout in Bend” in 2020.

Winner of the 2016 Readers’ Choice Award by The Source Weekly, the Latin-inspired Barrio has become a well-known Bend business. With humble beginnings as a food truck, chef Steven Draheim cooks up Mexican, Spanish, Southern American and American fusion dishes that have wowed visitors and locals for years; four different kinds of paella can be found right next to tacos, a Oaxacan cheeseburger and a local take on a popular Mexican street food, elote.

You can find these fusion dishes plus cocktails and micheladas at one of Barrio’s food truck locations, as they have paused their indoor dining operation in downtown Bend until further notice. Until then, guests can dine outdoors with any Barrio food truck, or consider picking up a to-go meal. The downtown location is offering meal bundles made for either a family of four, or a couple on date night, to help make having delicious family meals at home a bit easier. 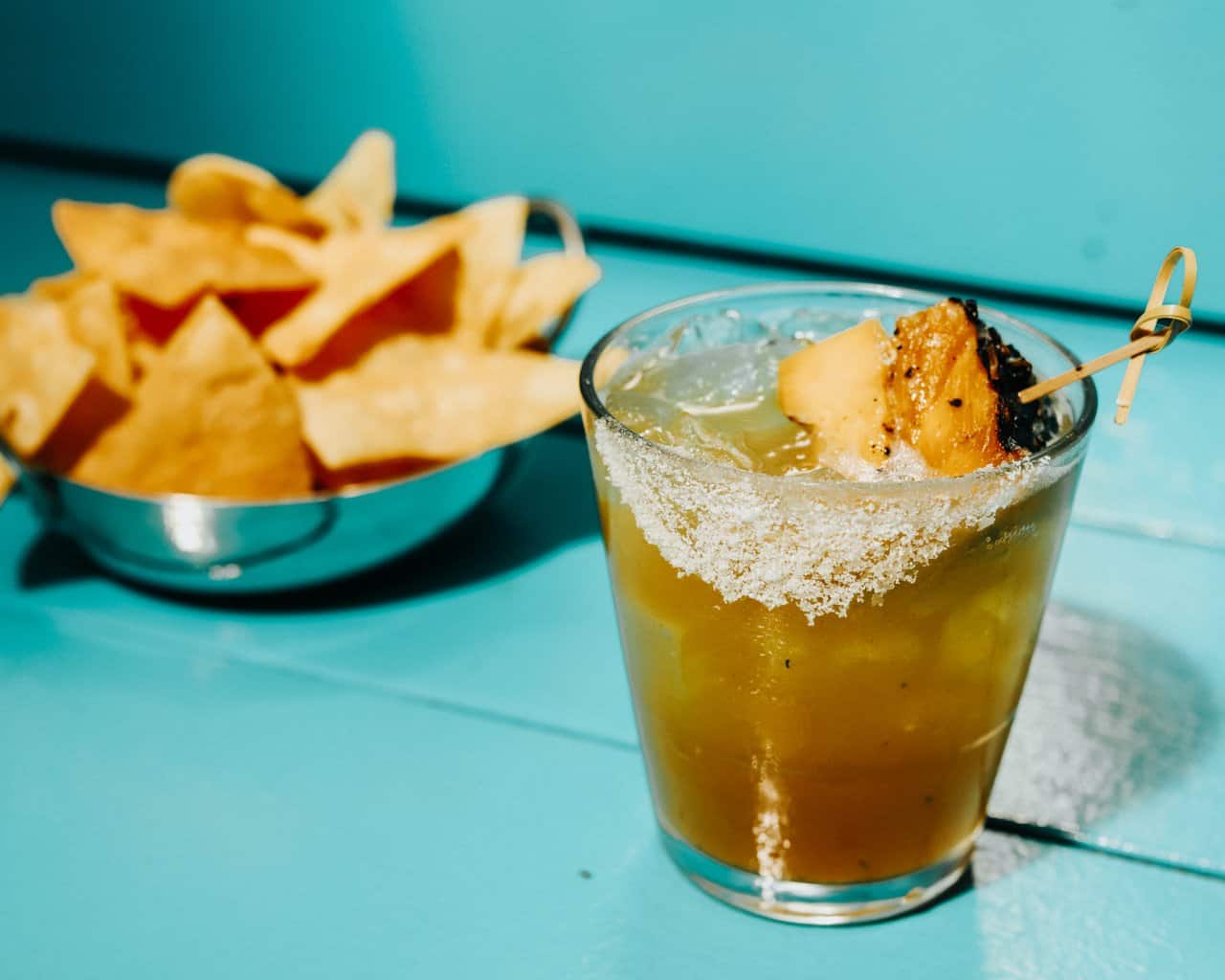 Named the restaurant of the year in 2020 by The Source Weekly, Zydeco is an upscale, American restaurant serving Northwest cuisine with Southern flare. The award was won in part due to Zydeco’s groundbreakingly delicious food, but also because the restaurant provided thousands of high-quality meals to those in need during the beginning of the COVID-19 pandemic.

Head chef Steve Helt, who co-owns the restaurant with his wife Cheri Helt, is the brains behind the culinary side of the operation. Constantly reinventing and reimagining well-known dishes, Helt serves up shrimp andouille and crawfish jambalaya alongside mouthwatering and perfectly cooked local cuts of meat. Local farmers are the ones providing the veggies for the roasted beet salad and the vegetable risotto. Helt is also a member of the nationally-acclaimed and peer-reviewed BCA, or Best Chefs America, an organization of highly-talented chefs who provide inside knowledge and judge the quality of other chefs in ways that non-chefs just aren’t able to. Among his peers, Helt is known as one of the best American chefs. Don’t believe us? Go taste the difference at Zydeco. 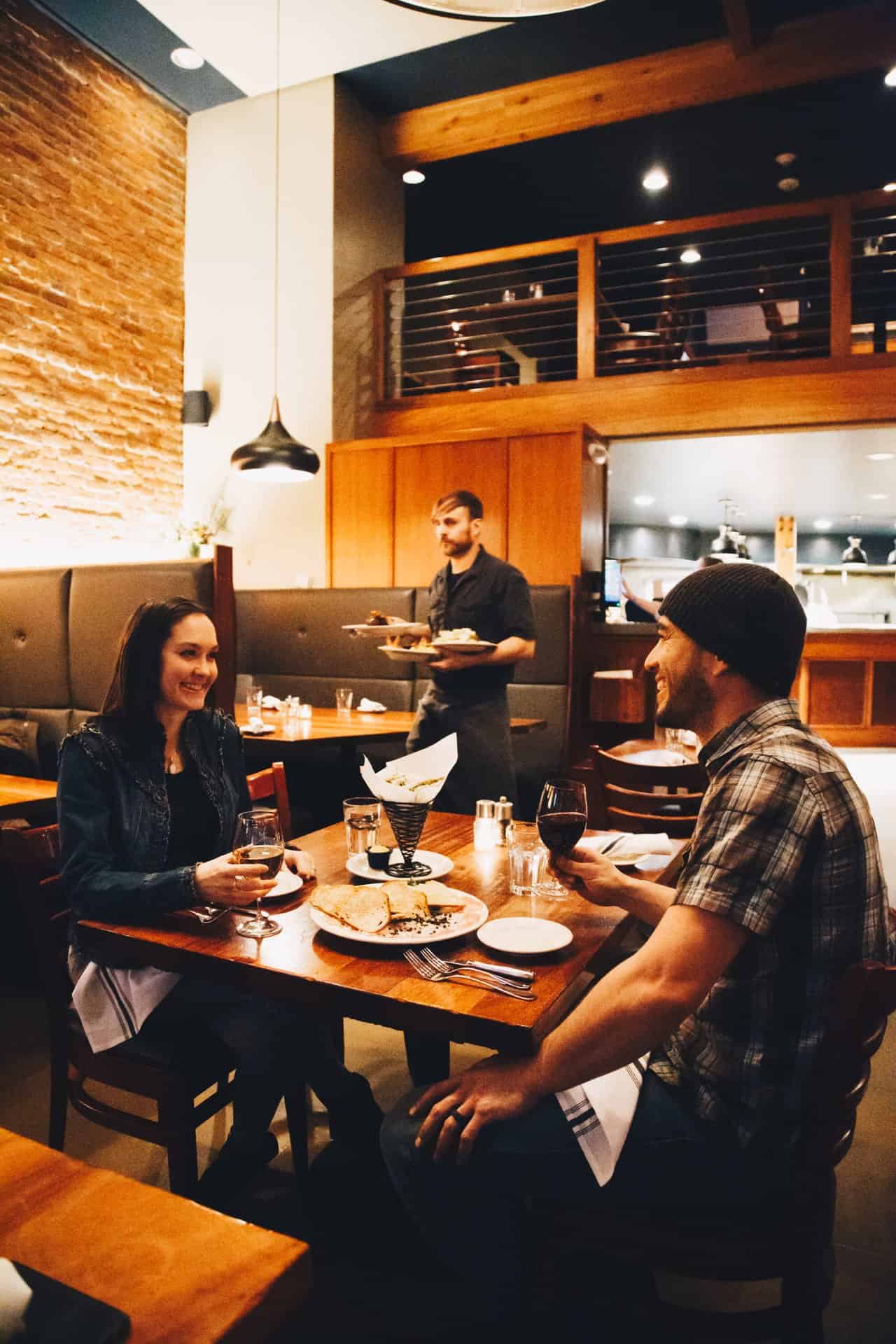 Award-winning service, an award-winning happy hour and a head chef published in “Best Chefs in America”; do you need more reason to try out 900 Wall? The food, headed by chef Cliff Eslinger, is best described as upscale, modern American cuisine with French and Italian influences. The dinner menu boasts some unique dishes, including some of the best beef carpaccio around. The prosciutto pizza with truffle oil will satisfy any palate, while entrees like the duck confit and the sockeye salmon masterfully combine American and European ingredients and flavors.

Chef George Morris remembers having his love of cooking cultivated at a young age. At just seven years old, he recalls watching a TV show where Julia Child prepared coq au vin, a French dish of chicken cooked in wine, and remembers his parents taking him to a French bistro soon after. From there, his love of cooking blossomed and he refined his skills at the Culinary Institute of America. Now, he’s not only the head chef at the upscale steak house, Bos Taurus, he also oversees the culinary operations at two other popular Bend spots, Miyagi Ramen in the box factory and Hablo Tacos in east Bend.

To ensure Bos Taurus has the highest quality beef around, Morris originally selected 75 different cuts of meat from 13 ranches, and after meticulously taste-testing each one, he selected about a dozen steaks from five ranches to serve. Morris and his staff pride themselves on being able to cook the perfect steak on a daily basis, and this level of expertise has landed Bos Taurus on several award spots, including Bend Magazine’s Readers’ Choice Awards for the best restaurant in Central Oregon.

Chef Eslinger is originally from upstate New York where he worked in restaurants as a teenager. After graduating from the Culinary Institute of America, he moved to Bend and broke into the culinary scene at Merenda Restaurant and later at a Japanese-fusion restaurant called Deep. In 2009, Eslinger helped open 900 Wall and it wasn’t too long after when he was included on the advisory board for Bend’s Cascade Culinary Institute for his commitment to innovation, quality, and sourcing every ingredient as ethically and sustainably as possible.

Chef Joe Kim of downtown Bend’s 5 Fusion and Sushi Bar demonstrated his dedication to the community when he was invited to be a chef at the James Beard House in New York. Kim decided not to travel across the country and soak up the limelight. Instead, he leveraged the recognition and organized a series of benefit dinners that raised more than $16,000 for local culinary scholarships. In 2015, 2016 and 2017, he was nominated as one of the best Northwest chefs by the James Beard Foundation; the first Central Oregon chef to ever receive the nomination.

Kim’s innovation in the kitchen sets him apart from the rest. His dishes are described as beautiful works of art that are original, witty, and above all, seriously delicious. Try one of his original dishes, fusing Northwest and Japanese flavors, or sample a variety of high-quality sushi with a nigiri flight. From upscale dishes like seared foie gras and wagyu beef tartare with bone marrow to the finger licking KFC (Korean Fried Chicken) and wagyu burger sliders, palates of all kinds will find satisfaction from Kim’s mastery of the kitchen. Enjoy your meal and the full bar outdoors in the Brooks Alley Patio, which overlooks the nearby Mirror Pond near the historic Tower Theatre.

Be sure to check out other food options and Central Oregon restaurants.