What Does the High Desert Mean in Central Oregon?

In the wider imagination, Oregon is seen as a rainy state—a place where umbrellas are outnumbered only by rain-soaked forests of Douglas fir in the Cascade Range, where a perpetual cloud hangs over the state like a houseguest who’s overstayed their welcome, and where residents can decipher the difference between “partly rainy” and “partly sunny” forecasts.

Indeed, the Central Oregon high desert begins at the eastern foot of the Cascades—and continues its march through much of the central, eastern, and southern parts of the state. As such, most of Central Oregon is actually considered “high desert” (so named for its high elevation; much of the region sits at 4,000 feet above sea level and higher).

But it’s unlike any desert you’ve ever seen or experienced. So here’s more on the terrain and climate of the Central Oregon high desert—along with resources for learning more and tips for making the most of your next visit to the dry side of the state. 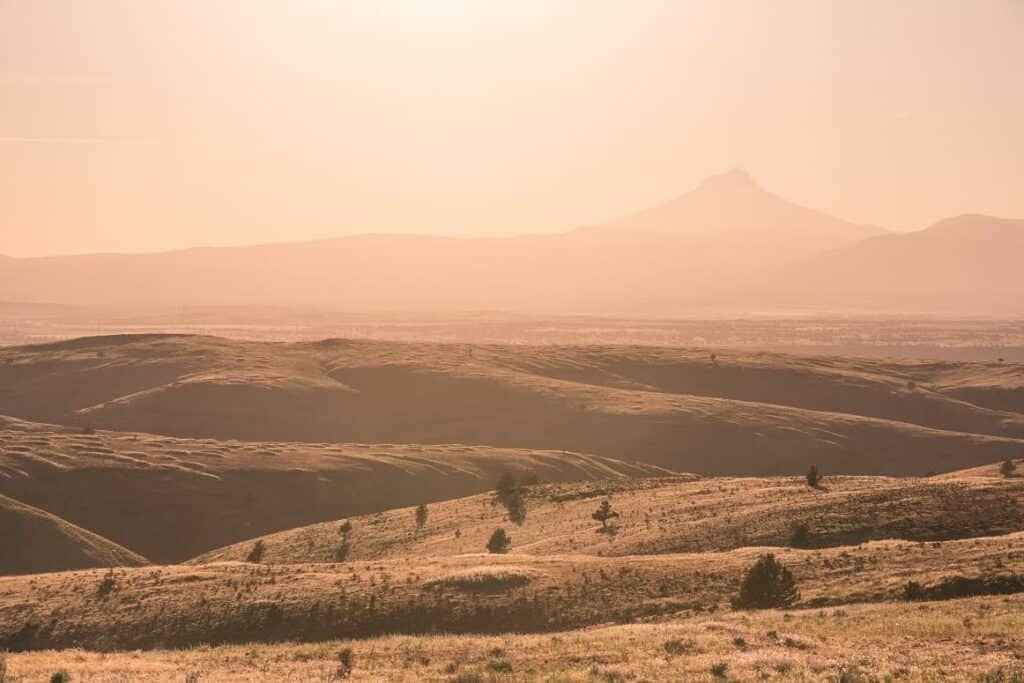 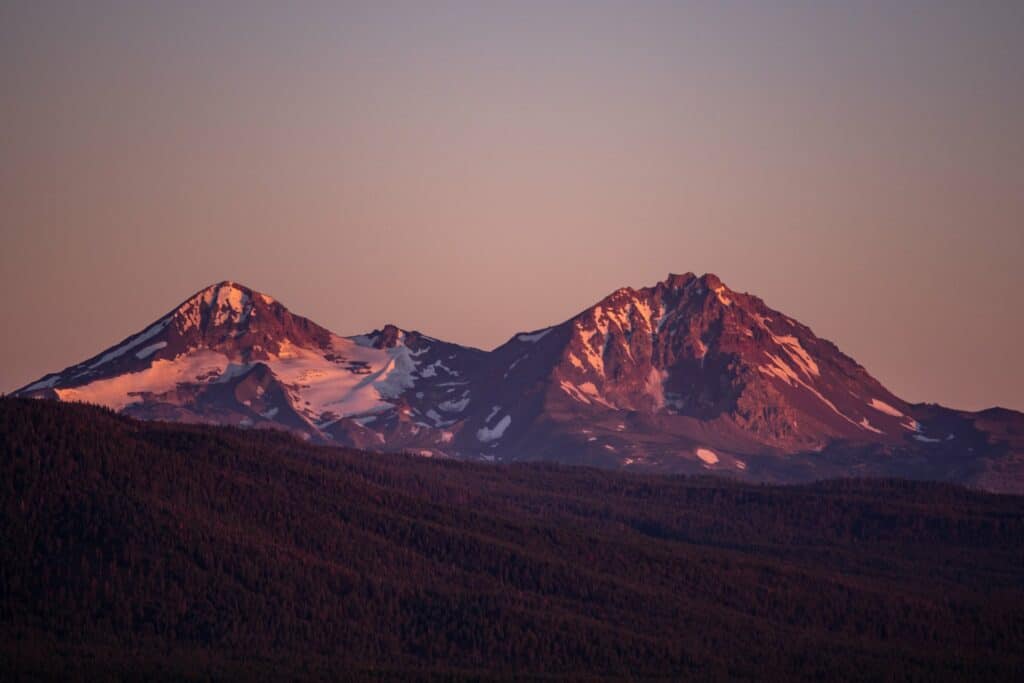 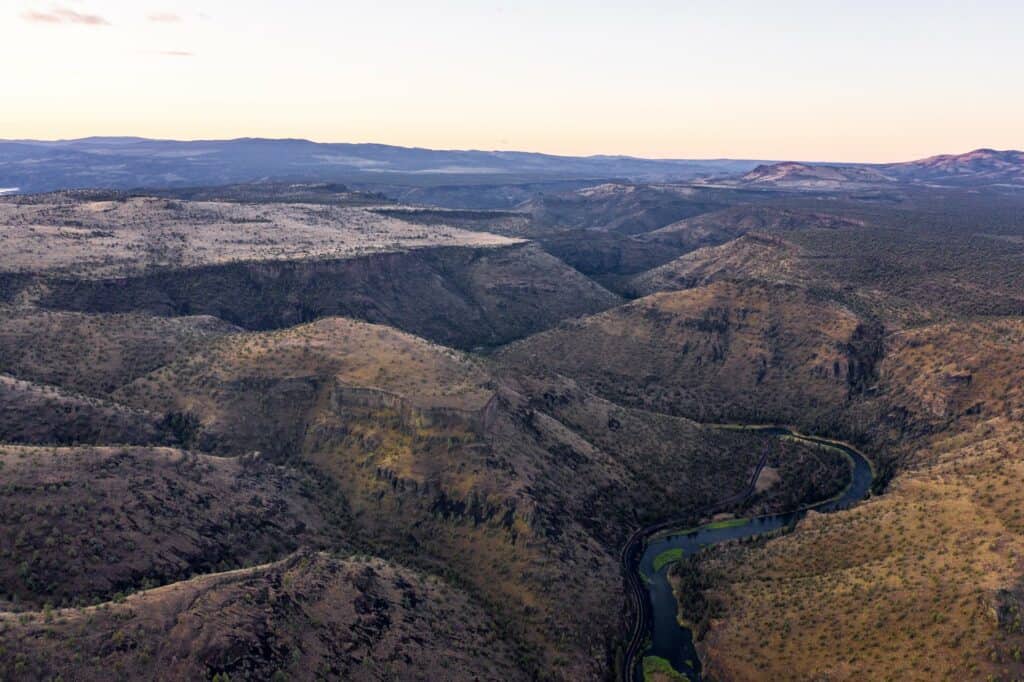 First and foremost, a quick science lesson: The Oregon high desert formed up to 30 million years ago by a steady barrage of lava flows—and, today, is only possible because of what’s called a “rain shadow” in the Cascade Range. Essentially, that means the mountains in Central Oregon prevent precipitation from passing their crests—giving the mountain forests their rich green hues and topping our favorite peaks with annual snowfall totals that can reach 450 inches or more.

As a result, Central Oregon sees precious little rainfall each year; Bend, for instance, receives less than 12 inches annually. That lack of rain creates dry conditions and allows the region’s sweeping high desert to take shape. (Funny enough, our “high desert” actually receives too much rainfall to officially qualify as a desert; calling it a shrub-steppe, marked by grasslands and prevalent vegetation, is more accurate—but far less fun to say. Other descriptors for the area, given by cartographers in the late 1800s, have included “sage plains” and “great sandy desert.”)

When most of us imagine desert terrain, we usually think of stately cacti standing tall, sheets of sand unfurling toward the horizon, and—other than the stray palm tree—an almost total lack of vegetation.

And, sure: We have plenty of sand blowing around Central Oregon (some of it deposited by a volcanic eruption that led to the formation of Crater Lake 7,700 years ago). But our desert landscape is far from desolate.

Rather than muted browns, for instance, the high desert is punctuated with bright yellow sagebrush buds, a dazzling tapestry of springtime wildflowers, crimson river canyons, midnight-black lava flows, and clear blue waterways (like the Deschutes and Crooked rivers, just two of the many rivers in Central Oregon). Even our beige rock formations—like Smith Rock—impress with smooth cliffs, angular peaks, and soaring ridges.

Some of the high desert plants dotting our landscape include the aforementioned sagebrush (perhaps the area’s most common plant), bunchgrass, wheatgrass, and—in spring—wildflowers. Common blooms include the bright purple monkeyflower, stalks of red paintbrush, and yellow buttercups. Of course, it wouldn’t be a desert without cactus—so keep an eye out for the diminutive hedgehog cactus, which rarely grows to more than a foot tall and is noted for bright pink blooms in early summer.

If you’d like an up-close look at that varied high-desert terrain, consider an outing to some of the region’s parks; the otherworldly formations at Smith Rock State Park are world-renowned rock climbing locations, and several hiking trails follow (and ascend above) the Crooked River, which flows through the park. You can also see where two rivers collide in the heart of the high desert at The Cove Palisades State Park; the Crooked and Deschutes rivers meet within the park, forming Lake Billy Chinook (one of the most popular lakes in Central Oregon among paddlers and boaters). Camping, hiking trails, and on-the-water activities are available throughout the scenic park. If you’re curious about other natural wonders around the region, learn more with our page on national and state parks in Central Oregon.

And just east of Bend, the 29,000-acre Oregon Badlands Wilderness is home to vast swaths of juniper and sagebrush, with more than 50 miles of hiking and equestrian trails to explore it all. Several trails end at (or pass by) volcanic rock formations, and wildlife (such as deer, elk, falcons, and eagles) is abundant in the quiet expanse. If you’re not up for hiking, park at one of the trailheads on a clear evening; the starry night skies in the Oregon Badlands are among the darkest (and most dramatic) anywhere in the region. 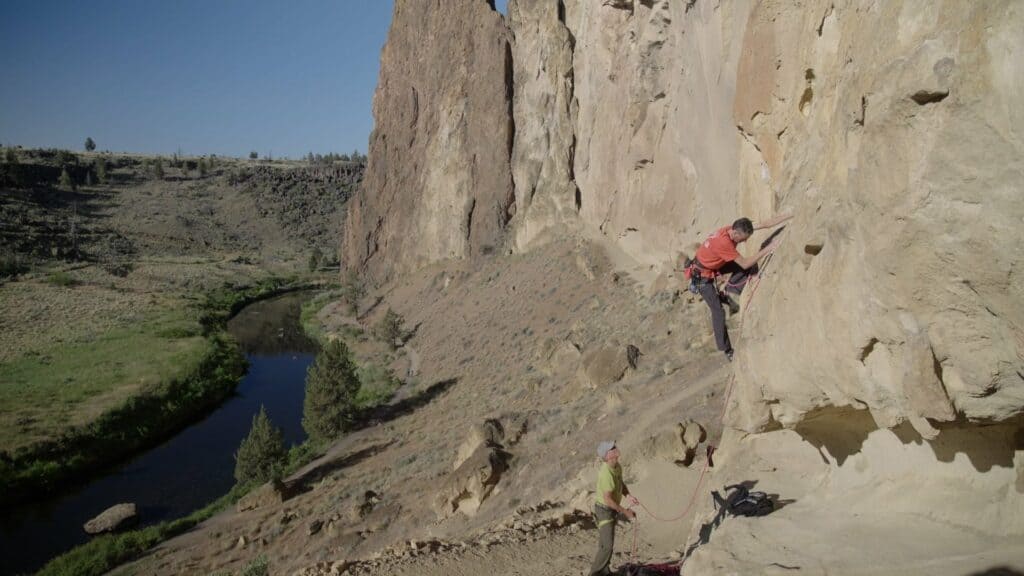 While our terrain surprises with pops of color around every bend in the river and viewpoint on the trail, our high desert climate is pretty much as you’d expect: sunny and dry. The juniper and sagebrush forests that dot our desert don’t require much precipitation—generally speaking, a few inches of year—and thrive in the sunny climate for which Central Oregon is so well known.

That said, seasons can bring extremes that visitors should be aware of and prepare for. Summertime temperatures in the Oregon Badlands Wilderness, for instance, can top 100ºF by lunchtime, with precious little shade to shield from the sun. If visiting the high desert at the height of summer, try to get an early start to the day (by 8 a.m. or so), and bring plenty of water. Occasional afternoon thunderstorms bring a dollop of rain to the desert, so check the forecast before heading out—and pack a poncho, just in case.

Fall usually means milder temperatures; daytime highs of 60ºF to 70ºF are common, with crisp mornings and breezy afternoons. You’ll also encounter fewer crowds on trails and at viewpoints, which means more solitude and a better chance of seeing wildlife—including deer, elk, pronghorn, jackrabbits, coyotes, and a variety of raptors.

Winter can be chilly, with high temperatures rarely topping 50ºF. That said, the high desert usually receives just the occasional dusting of snow—making it a fun, low-elevation alternative to ski slopes and sno-parks in the Cascades.

Springtime brings a slow thaw to the high desert, with wildlife (such as rattlesnakes) emerging from winter slumber. Sunny days are the norm, though rare rain showers may persist throughout April, May, and June. High temperatures hover between 50ºF and 60ºF, with colorful wildflower displays arriving in the Ochoco Mountain foothills and Oregon Badlands Wilderness as early as April. 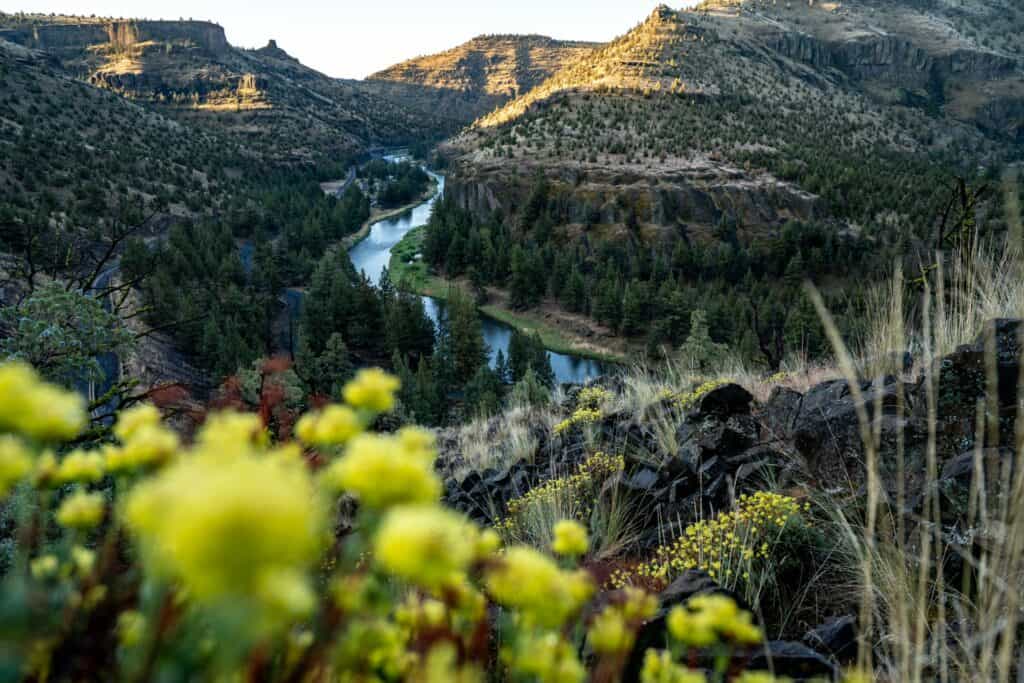 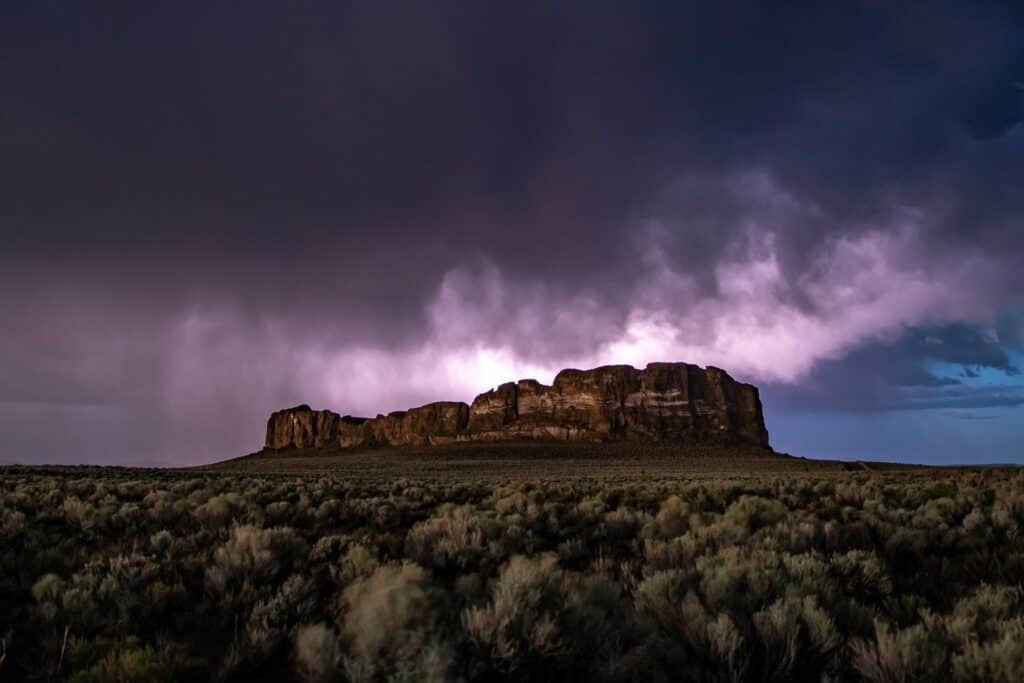 Learn More About the High Desert 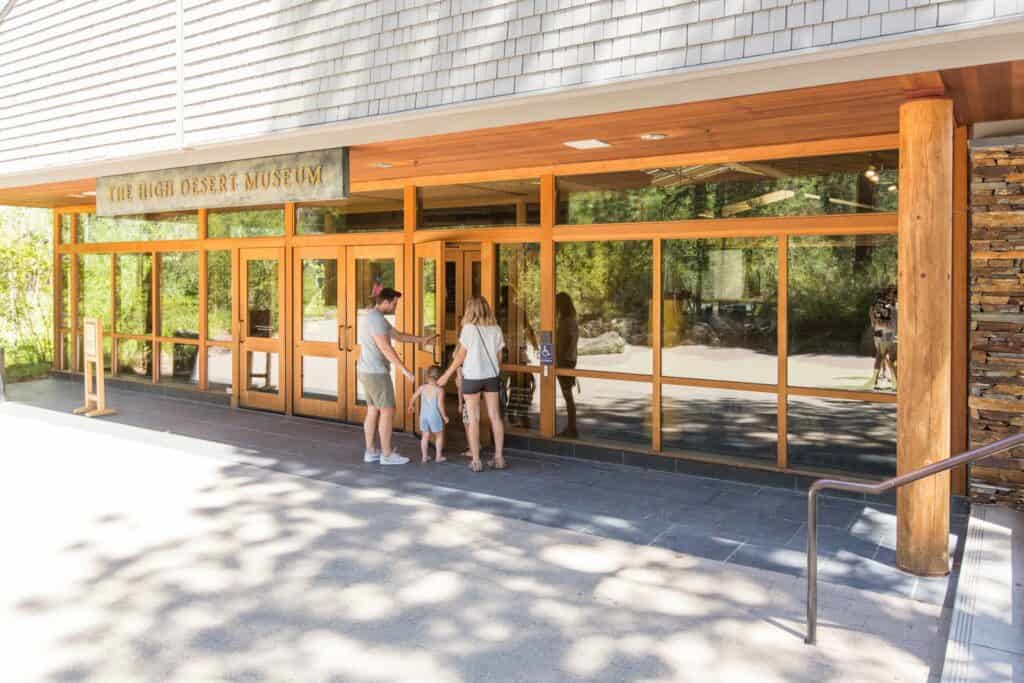 You’ll find several opportunities throughout Central Oregon for learning about the high desert. Chief among them is the appropriately named High Desert Museum, just a five-minute drive south of Bend. The museum hosts exhibits that cover the history of settlement in the high desert, centuries of Native Americans in the region, and the area’s climate and terrain; you’ll even find all manner of high-desert wildlife, from rattlesnakes to raptors, on display.

And in the heart of downtown Bend sits the Deschutes Historical Museum, which showcases exhibits on Native American history in the region, natural history, and early homesteaders in the high desert.