The Rivers in Central Oregon

Central Oregon is known for its many landscapes—the majestic peaks of the Cascade Range, towering forests, ancient lava flows, and the wide-open high desert.

And what unlikely trait do these geologic marvels have in common? They’re all home to some of Central Oregon’s most notable rivers.

The Deschutes River, for instance, begins in the Cascades before winding its way through forests and shrub-covered desert. The majestic Metolius River, meanwhile, gets its start at the base of Black Butte near Sisters. And the Crooked River begins near the geographic center of Oregon, flowing through rocky canyons and shrub-covered plains. It’s almost poetic, then, that all three rivers come together in the dry, arid high desert to form Lake Billy Chinook.

Other rivers populate every corner of Central Oregon. Fall River floats lazily through the forests outside La Pine, for instance, while the Little Deschutes River ambles for more than 100 miles in the southern portion of Central Oregon.

Each of these rivers have played a key role in the history of Central Oregon, whether as historic fisheries for Native American tribes or modern-day sources of outdoor recreation. So here’s a bit on some of the biggest rivers in Central Oregon—where they flow, how to enjoy them, and more. 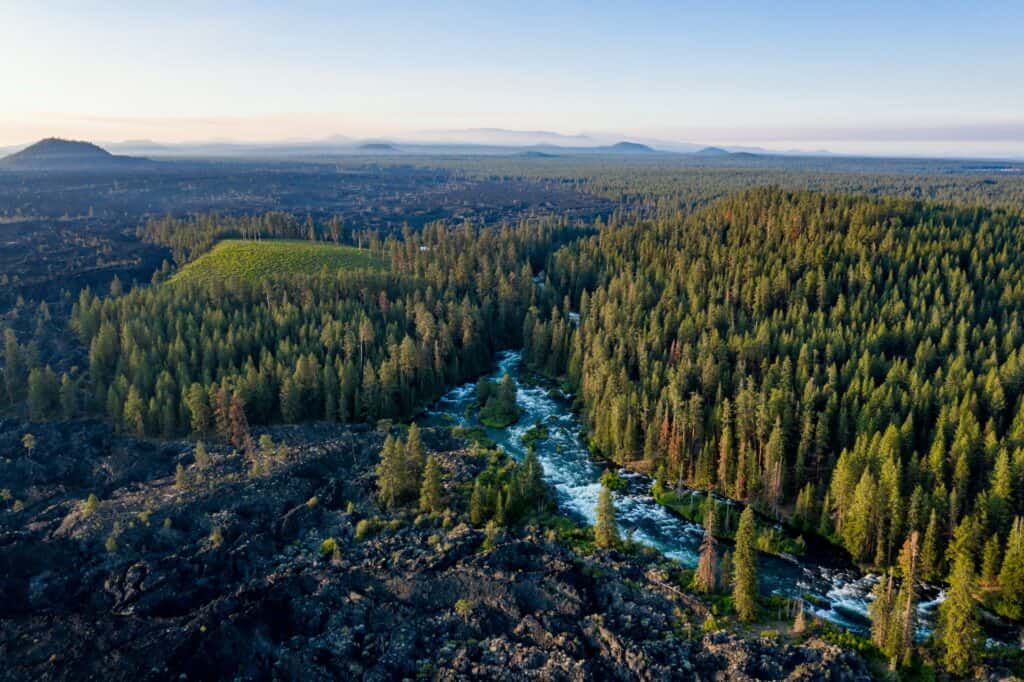 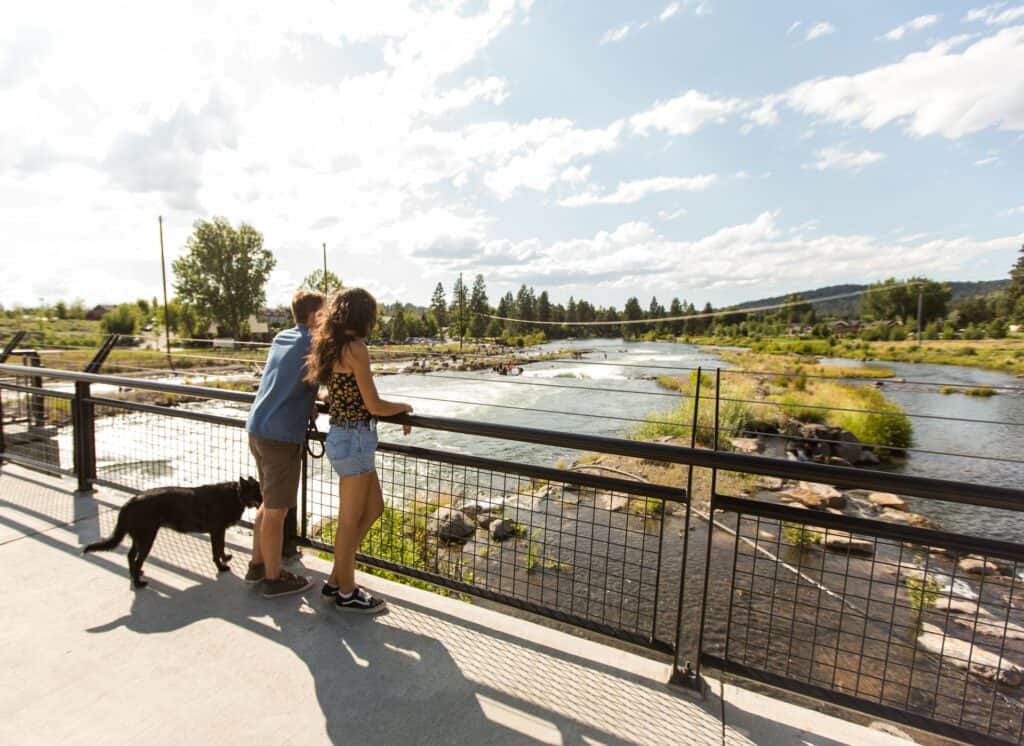 For generations, the Deschutes (pronounced “Deh-chutes”) has been the economic, cultural, and recreational backbone of our region—showcasing its natural beauty, offering countless outdoor opportunities, acting as a vital resource for local Native American tribes, and creating the conditions that brought the first European settlers to Central Oregon. (We started growing when the region’s first lumber mills were built along the banks of the Deschutes more than a century ago—and haven’t really stopped growing since.)

First, the name: The river we call “Deschutes“ (also the name of the most populated county in Central Oregon and one of the region’s biggest breweries) was known in the 1800s as the “River of the Falls”. In French, that translated to “Riviere des Chutes”—and our tendency to simplify geographic names eventually landed on “Deschutes.” (Why the River of the Falls in the first place? Two theories abound: One references a falls-like feature where the Deschutes flows into the Columbia River. The other theory suggests it was named for Sherars Falls, a whitewater section of river where Native Americans have fished for centuries.)

The Deschutes River begins as snowmelt in Little Lava Lake, just 45 minutes west of Bend, before meandering its way south (where it enters Crane Prairie Reservoir and Wickiup Reservoir); just beyond the pair of reservoirs, the Deschutes River turns north—where it passes through the likes of Bend and Tumalo (and near Warm Springs) before emptying into the Columbia River at the northern edge of Oregon. In all, the Deschutes River measures roughly 175 miles.

Along the way, the Deschutes offers almost too many recreational opportunities to mention here—but we’ll try.

The upper Deschutes River, near its headwaters in the Cascades, offers excellent angling opportunities at Crane Prairie and Wickiup reservoirs. (Crane Prairie, one of the best spots for fishing in Central Oregon, is home to what locals call “cranebows”—rainbow trout that grow quickly in summer and can reach 10 pounds or more.) Closer to Bend, the Big Eddy Thriller is a series of rapids that reach class-III status and offer heart-pounding adventure for whitewater rafting enthusiasts. (If the reservoirs, both in the Cascades, are the agenda for your next outing, learn more about the area’s most notable peaks with our page on mountains in Central Oregon.)

The middle Deschutes River, which begins around Bend, mellows out and creates the ideal conditions for one of Central Oregon’s most beloved summertime outings: floating the river. Scores of tubes float the Deschutes between parks around Bend all summer long, with tubing rentals and daily shuttle service available. (Learn more about floating the river in Central Oregon.) The river is also popular with paddlers who appreciate its leisurely flow through town. And Bend Whitewater Park, in the heart of the city, offers river channels for river surfing, bodyboarding, and whitewater kayaking. 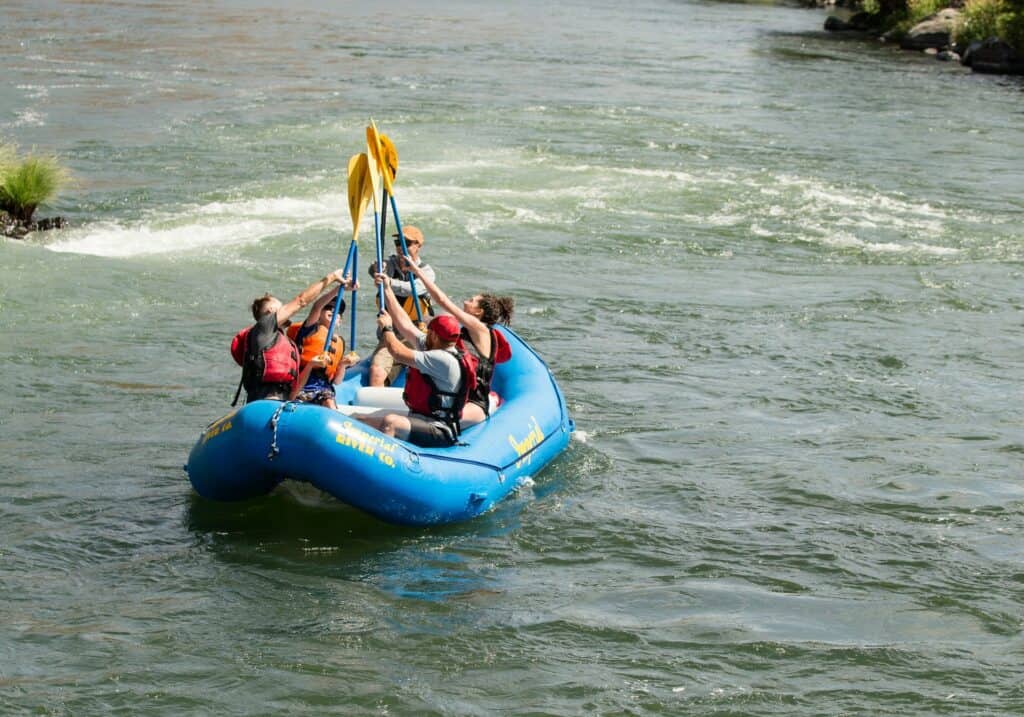 Further north, the lower Deschutes River heads into the Central Oregon high desert and is home to the region’s biggest rapids—with Maupin serving as a home base for some of the best whitewater rafting in Central Oregon. Craggy canyons line the river through this high-desert expanse, with up to class-IV rapids thrilling even the most experienced rafters. (Of course, outings for more relaxed rafters are available.) This is also where you’ll find Sherars Falls, a rollicking waterfall on the river and the site of a longtime fishery for local Native American tribes.

And what about the Little Deschutes River? The tributary flows for roughly 100 majestic miles through a glacially carved canyon and the Deschutes National Forest, passing the likes of La Pine, Crescent, and Gilchrist before joining with the larger Deschutes River in Sunriver. 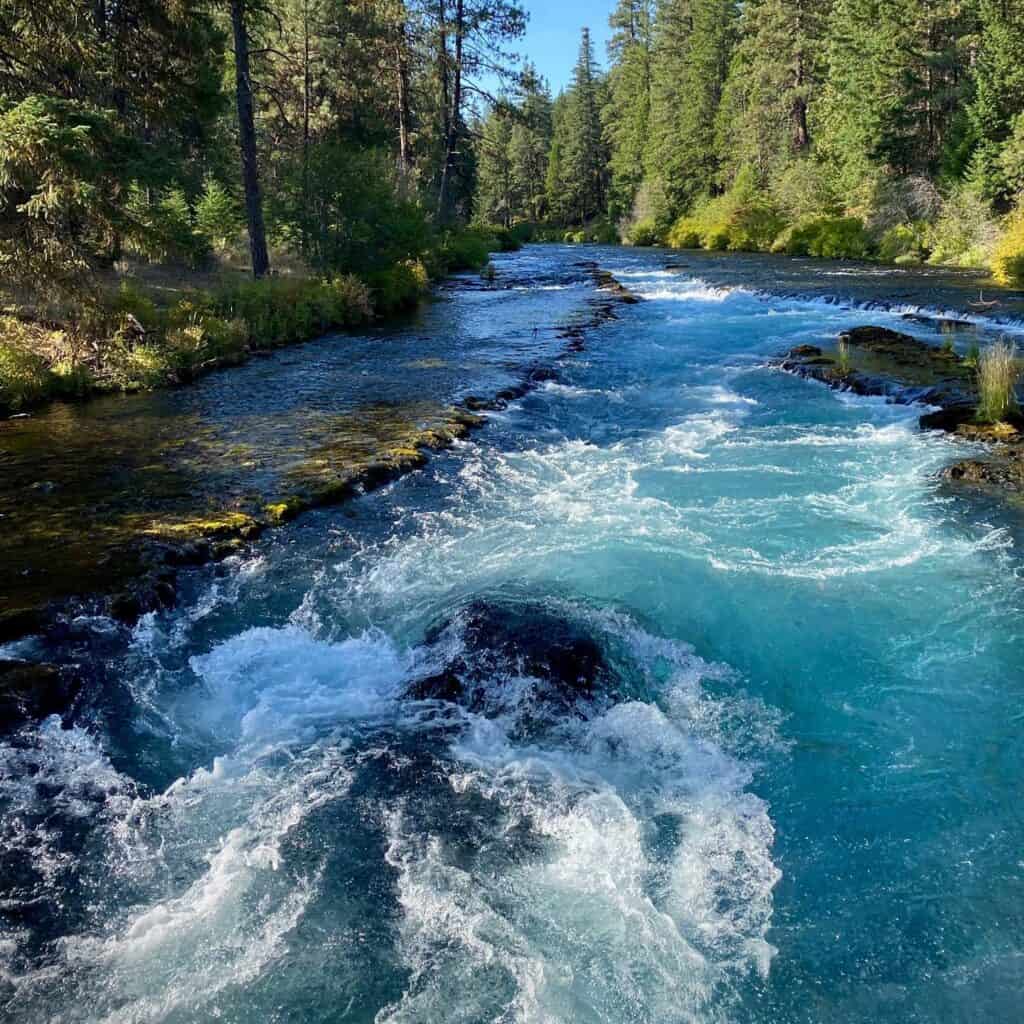 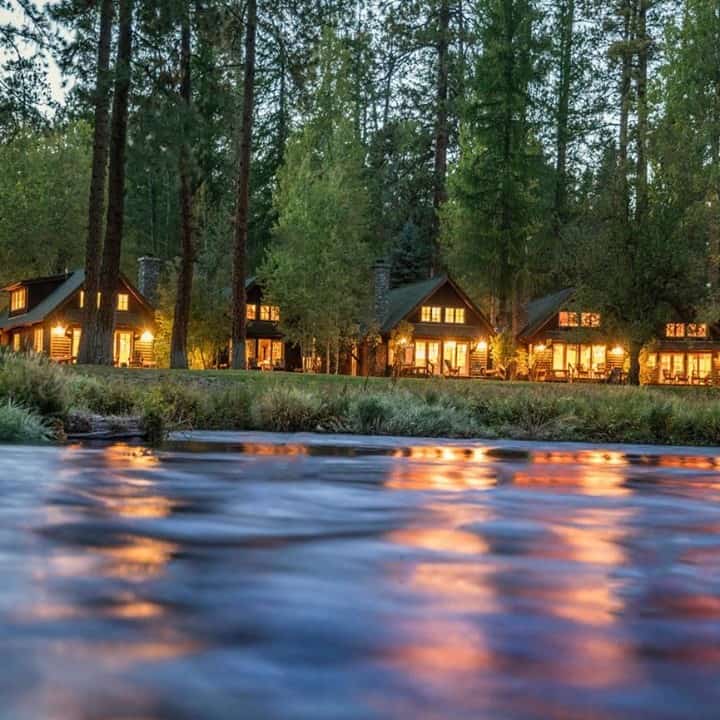 The Metolius River emerges from an underground spring at the base of Black Butte—though scientists believe the spring itself begins further west, in the Cascade Range—and remains a magical site, through every bend, before emptying into Lake Billy Chinook after 29 miles.

The tributary of the Deschutes River is perhaps the region’s most enchanting waterway with anglers, all casting a fly in pursuit of the rainbow trout, bull trout, and brown trout that prefer the clear, chilly waters of the Metolius. Hiking trails, accessible from several access points near Sisters and Camp Sherman, follow the river’s banks; one such trail leads to the Wizard Falls Hatchery, where kids of all ages can learn about, see, and (for a small fee) feed rainbow trout and kokanee salmon.

Ponderosa pine lines vast stretches of the river, and wildflowers thrive in spring and summer. (The purple-and-white Peck’s penstemon, for instance, grows along the Metolius River and in the Camp Sherman area—and is found nowhere else on Earth.) The season’s first flowers show up in May, with common species including the yellow arrowleaf balsamroot, stalks of purple lupine, and wild rose (noted for its vibrant pink petals). Really, is it any wonder the Metolius has been officially designated a “scenic” river?

Also noted for its clarity is Fall River, which emerges near La Pine and flows for roughly 12 miles before feeding the Deschutes River. The cold, clear river is popular with anglers who enjoy casting a fly for brook, rainbow, and brown trout. A small campground and hiking trail line the river, rimmed largely by pine and willow trees.

The Wild and Scenic Crooked River

So far, we’ve covered Central Oregon rivers that begin in the Cascade mountains and their forested foothills. But the Wild and Scenic Crooked River, with headwaters near the geographic center of Oregon, twists and turns more than 155 miles through the region’s high desert—passing through khaki-colored canyons and in the shadow of ancient rock formations before ending just outside Madras.

The river, with spring-fed headwaters at the eastern edge of Deschutes County in Central Oregon, is fed by several tributaries as it meanders between the Ochoco and Maury mountain ranges, heads through sweeping floodplains, and courses through deep canyons. Just west of the Ochoco and Maury mountains, the Crooked River flows into Prineville Reservoir, a popular lake that boasts year-round angling opportunities. Further west, the river bisects rocky ridges at Smith Rock State Park outside Redmond, creating some of Central Oregon’s most photographed sites. (Unsurprisingly, both outposts are among the best-loved nature attractions in Central Oregon.)

Recreational opportunities abound along the winding river. The 37-mile round-trip Crooked River Scenic Bikeway, for instance, invites cyclists to follow its shores along less-traveled paved roads—where forests of pine, jagged rock formations, and occasional swaths of farmland line the river. Anglers fish for trout and whitefish in the Crooked River’s chilly waters, and regular wildlife sightings include deer, elk, osprey, eagles, and rattlesnakes. Class-IV and Class-V rapids offer adrenaline-pumping fun for whitewater paddlers, as well—especially as the river rambles into the heart of Central Oregon.

And as it heads north, the Crooked River meets the Deschutes and Metolius rivers in The Cove Palisades State Park. There they form Lake Billy Chinook, which is more than seven miles long and boasts roughly 72 miles of shoreline—making it one of the most popular lakes in Central Oregon. Learn more about The Cove Palisades, along with Smith Rock and other outdoor attractions, on our page about national and state parks in Central Oregon. 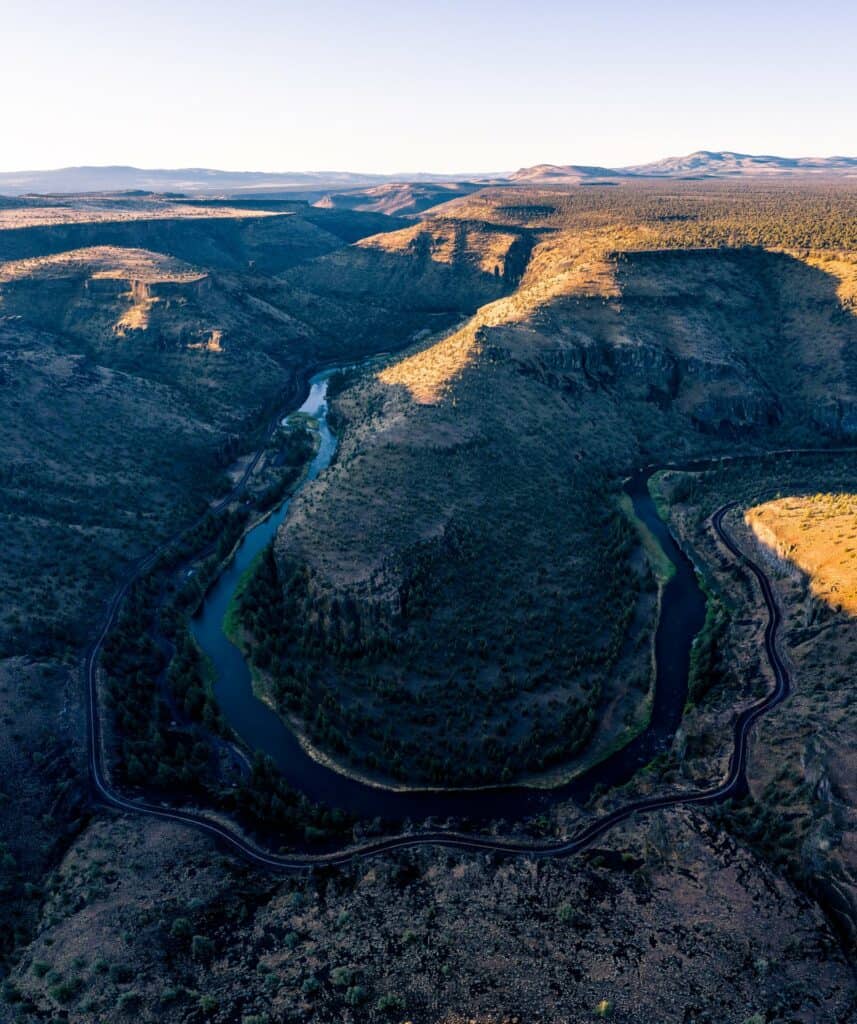