The Mountains in Central Oregon

The Cascade mountains in Central Oregon aren’t just Instagram fodder; they’re part of our identity, our natural beauty, and our way of life.

After all, those volcanic peaks—some angular, some jagged, some seemingly flat as a pancake—are where we ski in winter and hike in summer. They’re what we gawk at from brewpub patios and cozy campsites throughout the forests of Central Oregon. And they’re where we go when we want a little peace and quiet.

So as you get ready for your next visit to Central Oregon, we wanted to share some of the region’s most notable peaks—where they are on our natural skyline, how they got their names, and how you can enjoy the best of the region on your next trip through (or around) the Cascade mountains.

We can’t wait to see you at the trailhead and along the highway, but please keep in mind: The Cascades are home to some of the best hiking in Central Oregon, and the Central Cascades Wilderness Permit System is limiting the number of hikers and backpackers at many of the most popular mountain trailheads —part of a plan to preserve those magical wilderness experiences we all love and cherish—so be sure to plan ahead before your next trip. 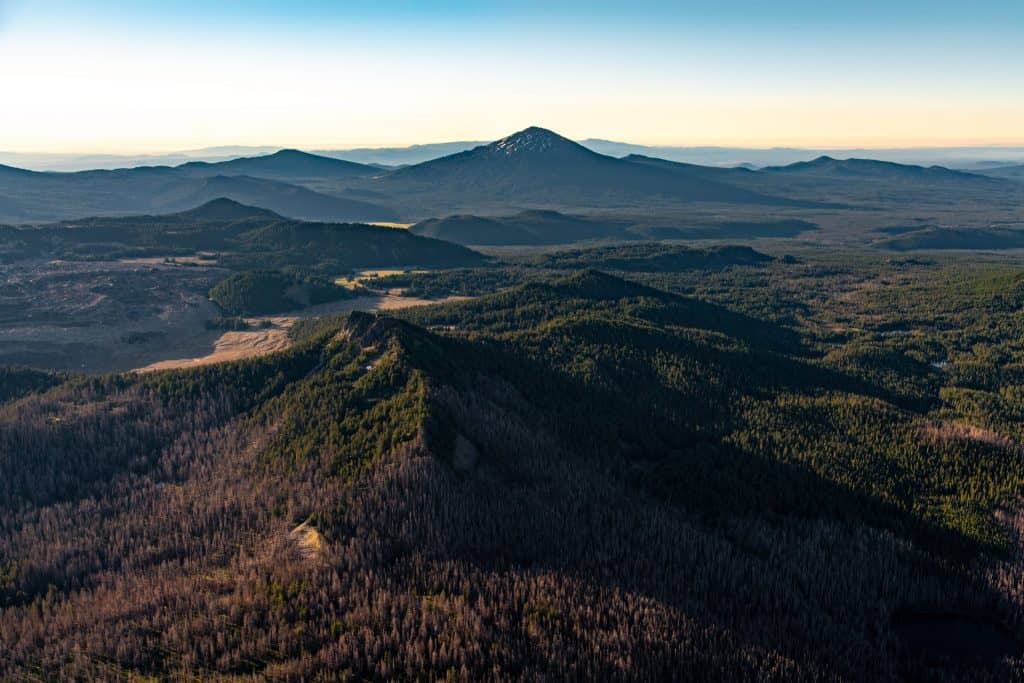 Whether you’re driving the McKenzie Pass—Santiam Pass Scenic Byway in summer, marveling from atop Pilot Butte in Bend, or hiking along the Cascade Lakes Scenic Byway, chances are good that at least a few peaks are within sight. Here’s a rundown of the most notable Cascade peaks in Central Oregon, from north to south, along with where they are and what’s nearby: 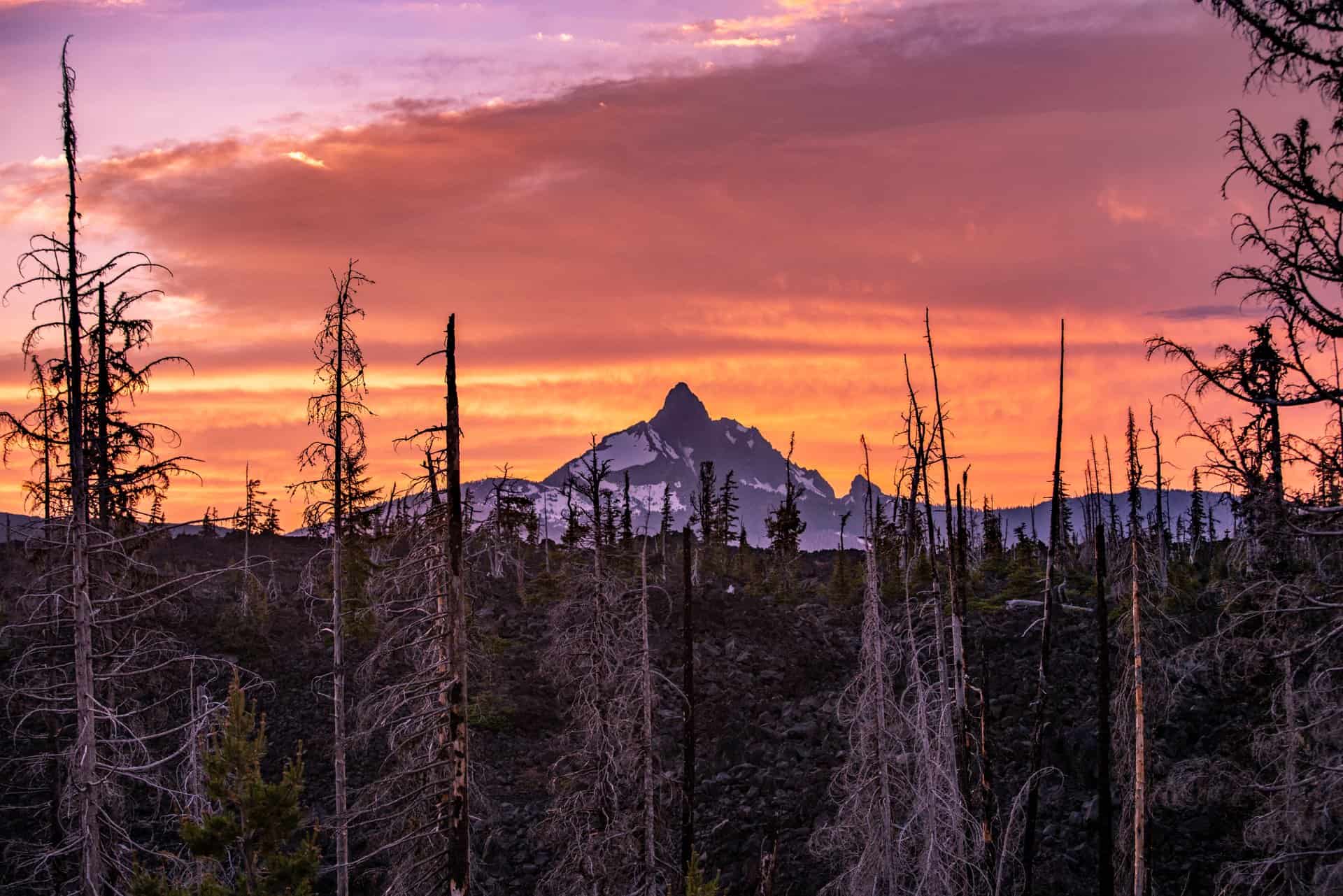 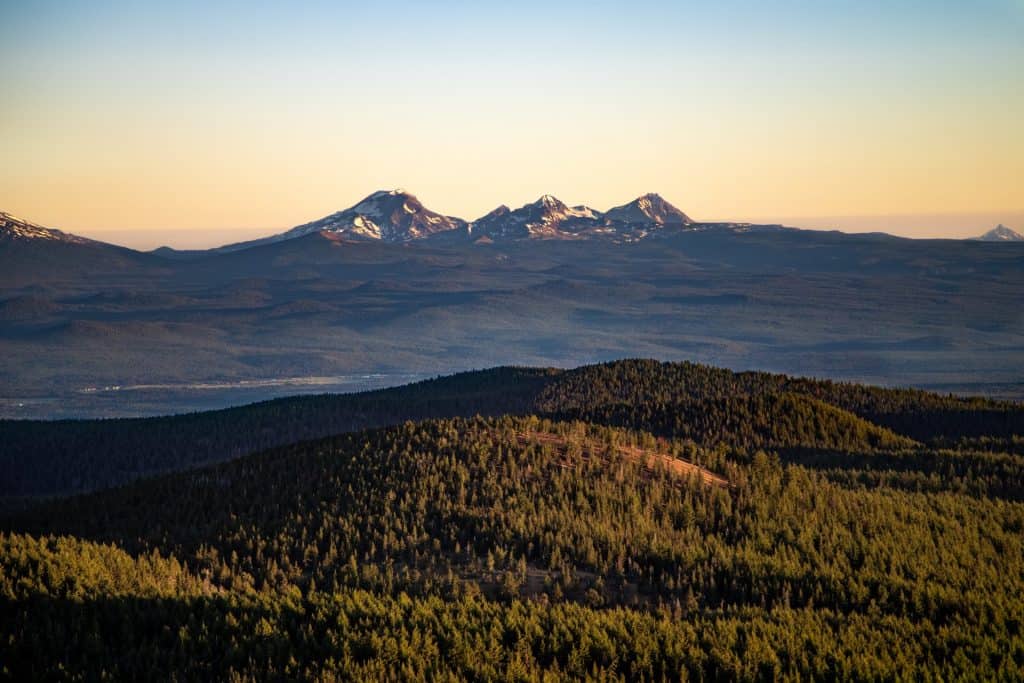 Mount Jefferson: The second-highest mountain in Oregon is also the northernmost of the Cascade peaks in the region. Lewis and Clark spied the mountain from near the mouth of the Willamette River in 1806 while on their famous Corps of Discovery expedition—and named it in honor of President Thomas Jefferson. Mount Jefferson is most clearly visible from Warm Springs and Madras.

Three Fingered Jack: This craggy peak is noted for a trio of rock spires at its jagged summit; it was once known as Mount Marion, but was later renamed—possibly in honor of a three-fingered trapper named (you guessed it) Jack. The mountain can be seen via the Pacific Crest Trail near Sisters and Camp Sherman.

Black Butte: The extinct stratovolcano just outside Sisters isn’t a rugged peak like its brethren in the Cascade Range—but its triangular, almost perfectly symmetrical shape is among the most distinctive in Central Oregon. No one’s exactly sure who named Black Butte, but see if you can spy the fire lookout on its summit while driving out of Sisters or heading to Camp Sherman—or better yet, hike to the top of Black Butte in summer and fall, where you’ll enjoy views of surrounding Cascade peaks.

Mount Washington: It will come as no surprise that the mountain—noted for its long, curvy slope and short, yet angular peak—was named for President George Washington. Interestingly, New England writer Hall J. Kelley advocated renaming the Cascades’ numerous peaks in honor of United States presidents in the late 1830s; he confusingly named another peak Mount Washington, although it’s likely locals had been calling the actual Mount Washington by its present name at that point. Today, the Mount Washington Wilderness is home to a variety of hiking, backpacking, and equestrian trails—including the Pacific Crest Trail.

Three Sisters: The trio of mountains—which, from certain angles, can look like just two peaks—are among the most striking in Central Oregon. The Three Sisters are simply known individually as North, Middle, and South Sister—and were called by their present names as far back as the 1850s; some around Central Oregon still call them Faith, Hope, and Charity, which were names possibly given to the peaks by Methodist missionaries in the mid-1800s. The surrounding Three Sisters Wilderness offers up-close views of the peaks via scenic hiking and backpacking trails.

Broken Top: Just south of the Three Sisters sits Broken Top, a shattered peak that’s among the most distinctive in Central Oregon. The craggy, uneven summit makes it clear why the peak was given its descriptive moniker. A popular hiking trail, accessed from the Cascade Lakes Scenic Byway, leads to the summit.

Mount Bachelor: Also called Bachelor Butte, Mount Bachelor got its name largely because it stands apart from the Three Sisters. Mount Bachelor’s somewhat flat top is one of the most recognizable peaks in Central Oregon; the mountain is home to the largest ski area in the Pacific Northwest (and the sixth largest ski area in North America), boasts a variety of summer adventure including ziplining and mountain biking on its forested slopes, and can be accessed via the Cascade Lakes Scenic Byway—just a quick, 20-minute drive from Bend.

The Natural Beauty of Central Oregon

You could spend weeks traveling around Central Oregon, hiking our trails and gazing upon our snow-capped peaks. But if you don’t have weeks to spare, here’s a quick guide to scenic drives around Central Oregon and how to enjoy the region’s never-ending natural beauty—including the iconic Cascade mountain range.

Pilot Butte State Scenic Viewpoint: You can either hike (year-round) or drive (spring-fall) to the summit of this extinct cinder cone just east of downtown Bend; from the summit, views cover roughly a dozen Cascade peaks and extend north all the way to Mount Hood. (Interested in exploring further? Learn more about other national and state parks in Central Oregon.)

McKenzie Pass—Santiam Pass Scenic Byway: The winding, 82-mile McKenzie Pass—Santiam Pass Scenic Byway is the closest thing Central Oregon has to a time machine: Travel through lava flows that stretch out in seemingly every direction, gaze upon more than a dozen Cascade mountains from Dee Wright Observatory (completed in 1935), camp in ancient forests, and hike to the base of thundering waterfalls and along the shores of emerald waters. The loop’s westernmost stretch straddles striking lava flows and the scenic McKenzie River—among the most scenic rivers in Central Oregon. 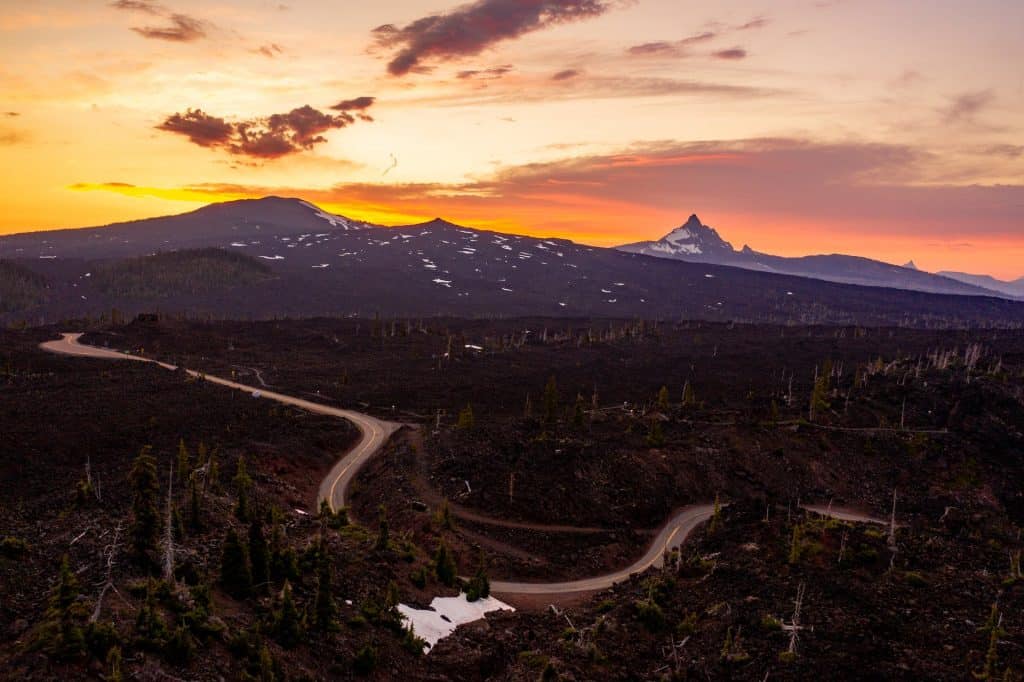