Hang out around Central Oregon long enough, and you’ll inevitably hear the question: What’d you do today?

When you hear that, the person asking isn’t curious about how work went, which errands you ran, or whether you binged the newest TV show. Instead, they’re usually asking: What’d you do outdoors today?

That’s because outdoor recreation isn’t just something we do to pass the time in Central Oregon; it’s how we spend our days, connect with nature, stay active, and engage with the region’s beauty—from shredding the slopes of forested Cascade peaks to paddling our lakes and rivers to hiking and mountain biking high-desert terrain.

And with so many options, it’s not unheard of to build a day around outdoor recreation: Where else, after all, can you mountain bike Phil’s Trail in the morning and float the Deschutes River in the afternoon—or to enjoy a quick trail run before heading out for a backcountry snowshoe trip?

The possibilities aren’t quite endless—but they’re close. So here’s a look at Central Oregon outdoor activities: what to do, where to go, and how to have the trip of a lifetime.

Top Outdoor Things to Do in Central Oregon

With many days of sunshine each year and plenty of public lands for making the most of those sunny days, we could fill two internets with all there is to do in Central Oregon’s outdoors. Instead, we’ll run down the top outdoor activities—along with when and where to enjoy them. 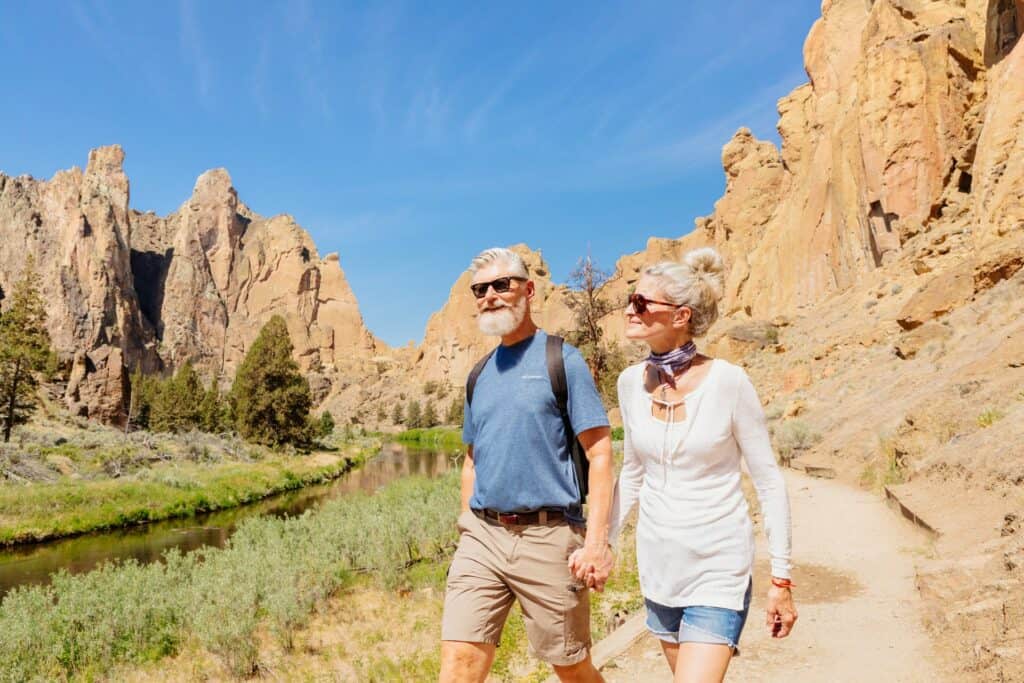 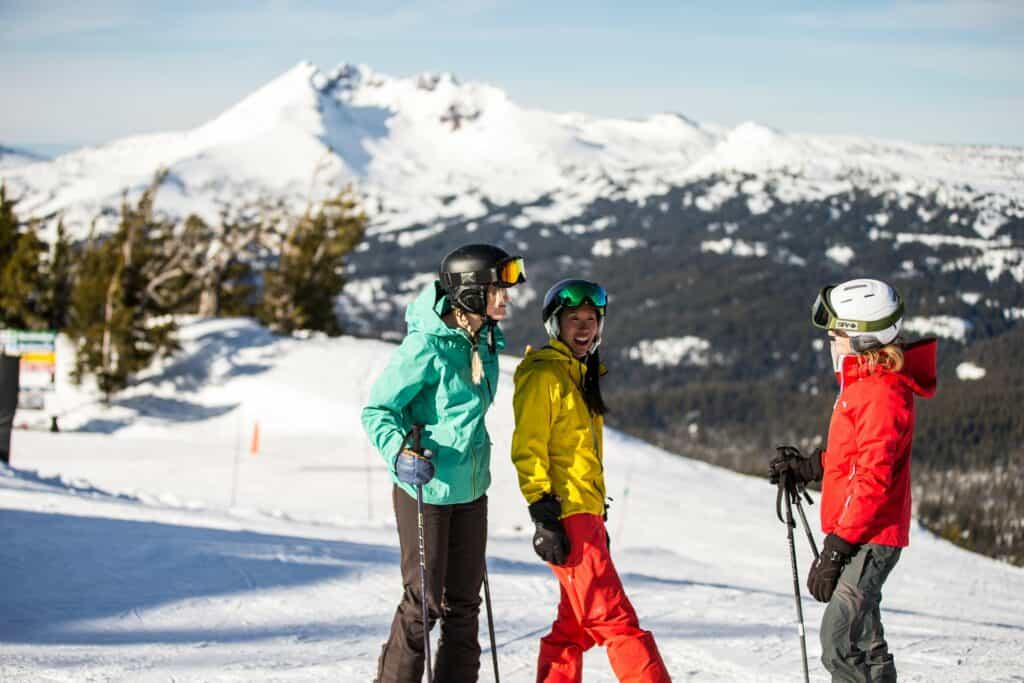 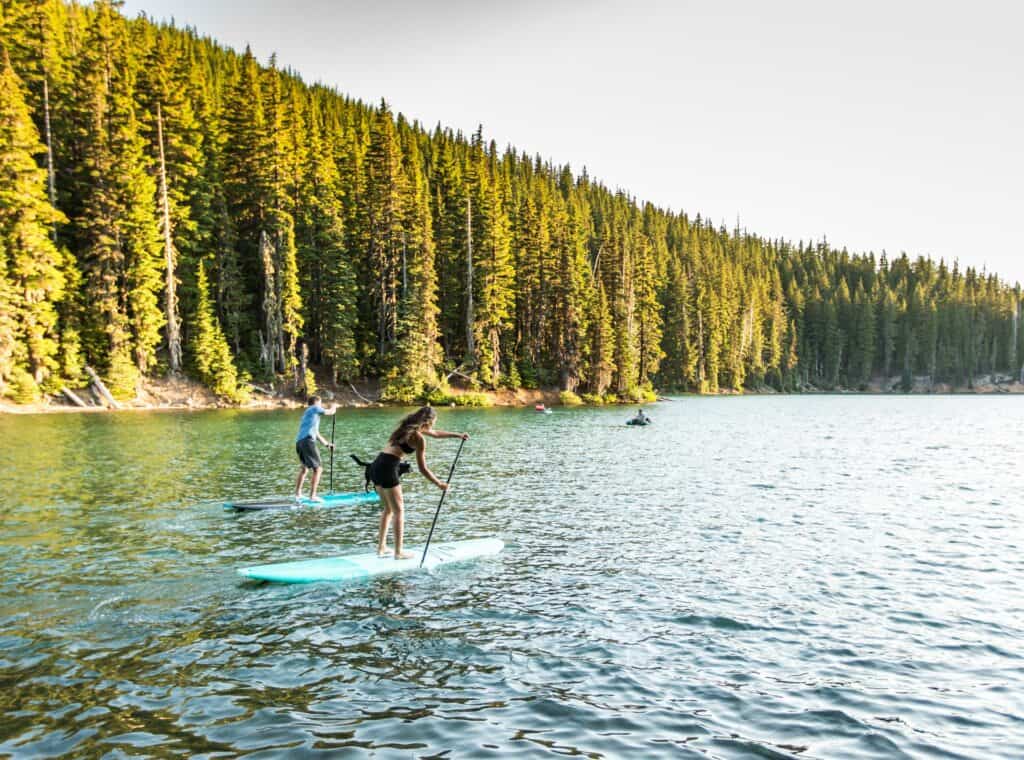 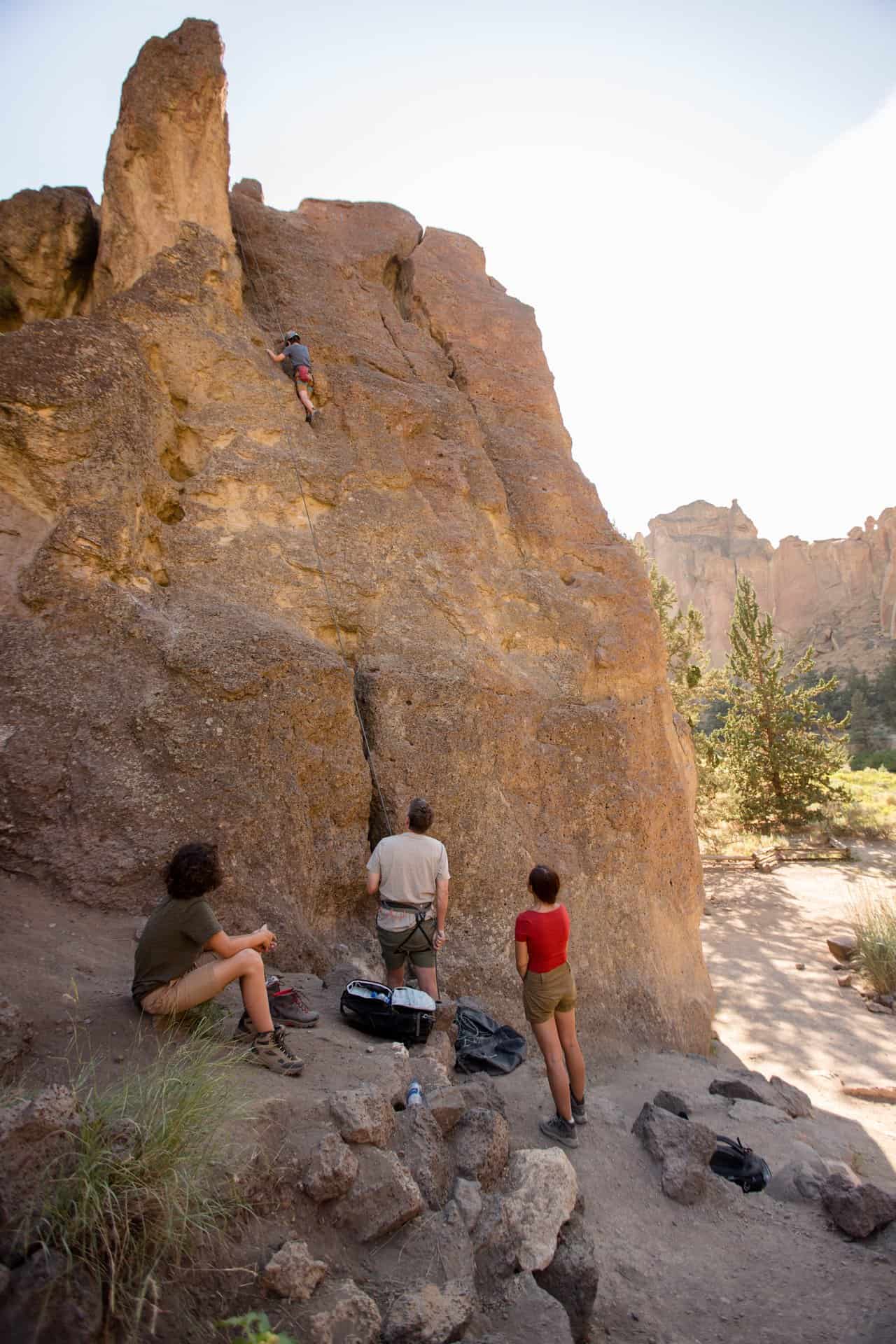 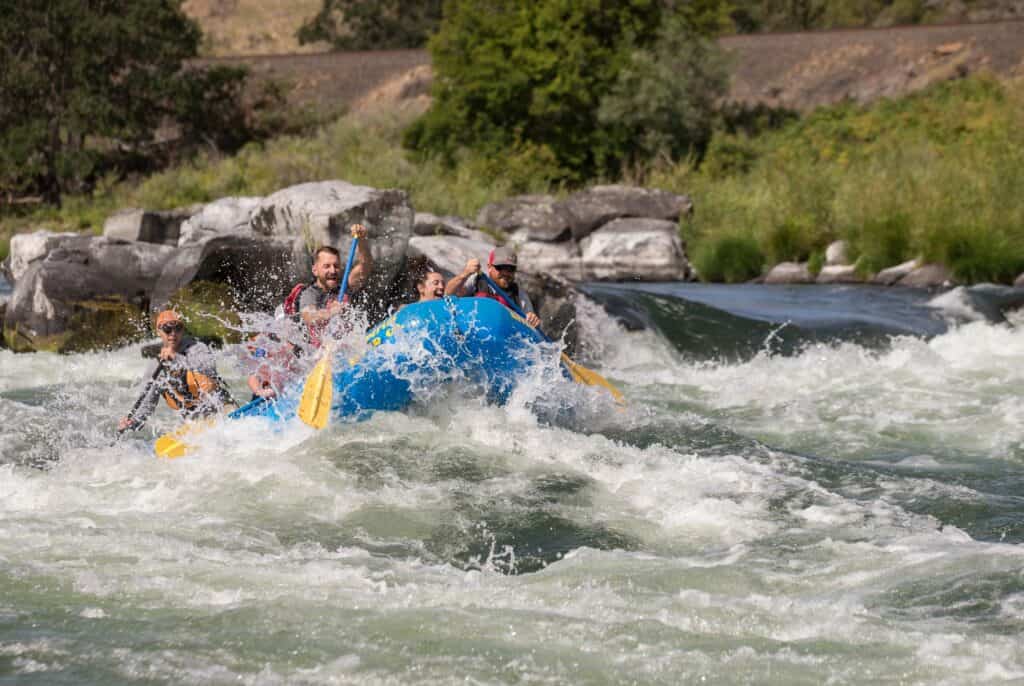 Hiking and Backpacking: Take your pick: hike into arid river canyons and alpine meadows, alongside emerald-green waterways, through high desert terrain, and amidst lush forests of ponderosa pine or Douglas fir. Whatever your preferred topography, you’ll find plenty to love on hikes and backpacking trips throughout Central Oregon. Best of all: That wide variety of ecosystems makes hiking a year-round thrill. If you’re looking for an escape to nature without a long drive, consider a jaunt on the Deschutes River Trail at the southern edge of Bend. If you’re ready to hit the trail, learn more about hiking in Central Oregon.

Downhill Skiing & Snowboarding: By Thanksgiving, Bendites are waxing their skis, watching the forecast, and not-so-patiently awaiting fresh powder on Mount Bachelor—the largest ski resort in the Pacific Northwest and the sixth-largest in North America. Bachelor boasts more than 4,300 skiable acres—and is home to 101 runs with up to 3,365 feet of vertical drop. Another popular resort is Hoodoo Ski Area outside Sisters; Hoodoo boasts a family-friendly skiing and tubing experience—and is the only resort for night-skiing in the region. (Looking for other winter sports? Check out our roundup of the best outdoor winter activities in Central Oregon.)

Mountain Biking: Just a short ride from downtown Bend, the network of mountain bike paths at Phil’s Trail are the stuff of legend: Beginner routes and more technical sections—where some paths are covered with rocks or boulder gaps—intermingle for an experience that demands repeat rides. South of Sunriver, the trails at LaPine State Park offer easy riding through a stately forest of ponderosa pine. Learn more about mountain biking in Central Oregon.

Paddling: Truth is, we could write an entire article on where to go kayaking or stand-up paddleboarding around Central Oregon—but we’ll do our best to narrow it down. The lakes that give the Cascade Lakes Scenic Byway its moniker are naturally popular (especially Sparks Lake, boasting views of South Sister, and the turquoise Devils Lake), as is the Deschutes River through the heart of Bend. For a quieter experience, head to Lake Billy Chinook at The Cove Palisades State Park near Madras, where three rivers come together in a manmade reservoir, or one of the two lakes within the Newberry Volcano caldera.

Floating the Deschutes River: When summer arrives, there is no better way to beat the heat than with a float on the Deschutes River. If you have your own tube and a ride, head to the quieter reaches near Tumalo State Park; otherwise, it’s easy to rent a tube in Bend, float through the heart of town, enjoy a shuttle back to your starting point—and then do it all over again. Interested in other flavors of summertime fun? Learn more about top outdoor activities in Central Oregon.

Road Cycling: All over Central Oregon, road cyclists get to enjoy a variety of experiences that can’t happen anywhere else. Each spring, for instance, the McKenzie Highway near Sisters opens to cyclists several weeks before automobiles get to enjoy the scenic drive over McKenzie Pass. That gives riders a safe opportunity to pedal alongside towering snow drifts, through fields of basalt lava flows, past alpine lakes, and into the heart of towering Douglas fir forests. Wondering what else awaits around the next bend? Learn more about road cycling in Central Oregon.

Rock Climbing: Not far from Redmond, Smith Rock State Park famously gave birth to sport climbing in the United States and today hosts nearly 2,000 routes on its cinnamon-hued rock formations—earning widespread acclaim as one of the top climbing destinations not just in Central Oregon, but in the United States. Beginners, meanwhile, gravitate toward the quieter Meadow Camp climbs beyond the southeastern edge of Bend; there the basalt cliffs range from 20 to 40 feet high and are almost entirely vertical.

Whitewater Rafting: Whether you’re looking for a thrill ride close to town or something a bit more remote, you’ll find plenty to love around Central Oregon. The Big Eddy Thriller, for instance, boasts exciting class III rapids just outside of Bend—and is among the most popular rafting trips anywhere in Central Oregon. Further downstream, the Deschutes churns to a boil near the community of Maupin, where whitewater rafters tackle the river’s adrenaline-pumping rapids—some appropriately imbued with ominous names like Devil’s Hole and the Elevators. (Interested in a guide to lead your next outdoor adventure—on or off the water? Learn more about guided tours in Central Oregon.)

Outdoor Activities for Everyone

The outdoors aren’t solely the domain of weekend warriors whose car trunks and garages are perpetually stuffed with dusty gear. Rather, adventure is available to outdoor enthusiasts of all abilities—from universally accessible paved trails to beginner-friendly outings designed with active children in mind. Here are a few of our favorite outdoor activities for everyone in your family around Central Oregon.

Trail of the Molten Land: One-third of the trail, departing from the Lava Lands Visitor Center in the Newberry National Volcanic Monument, is universally accessible—paved with gradual ascents. The rest isn’t suited to wheelchairs, but can be enjoyed by active children. The enchanting path heads through a basalt lava flow and includes interpretive panels for details on your otherworldly surroundings.

Dee Wright Observatory: The stone Dee Wright Observatory at the summit of the McKenzie Highway might get most of the love each summer, but hikers of all abilities can tackle the Lava River National Recreation Trail just next door. The short, universally accessible hike is paved and mostly flat as it passes through lava that flowed from a nearby crater more than 2,000 years ago. A few interpretive panels describe the geologic features and formations along the way.

West Metolius River Trail and Wizard Falls Fish Hatchery: You’ll have no trouble convincing the kids to join you for a hike along the Metolius River to the Wizard Falls Fish Hatchery. The mostly flat trail hugs the rivershore for most of its length, showcasing springtime wildflowers and plenty of wildlife, before ending at the storied fish hatchery. There, kids can get up-close views of rainbow trout, kokanee, spring Chinook, and summer steelhead—and feed the hatchery’s residents for a small fee.

Sunriver Homeowners Aquatic & Recreation Center: Known locally as the SHARC, the rec center offers a little of everything for kids of all ages in the heart of Sunriver: heated indoor aquatic facilities, water slides, a lazy river, a nine-hole disc golf course, a bocce ball court, a rock climbing structure, a full outdoor basketball court, and more. And if your little ones still aren’t tuckered out, learn more about other kid-friendly activities in Central Oregon. 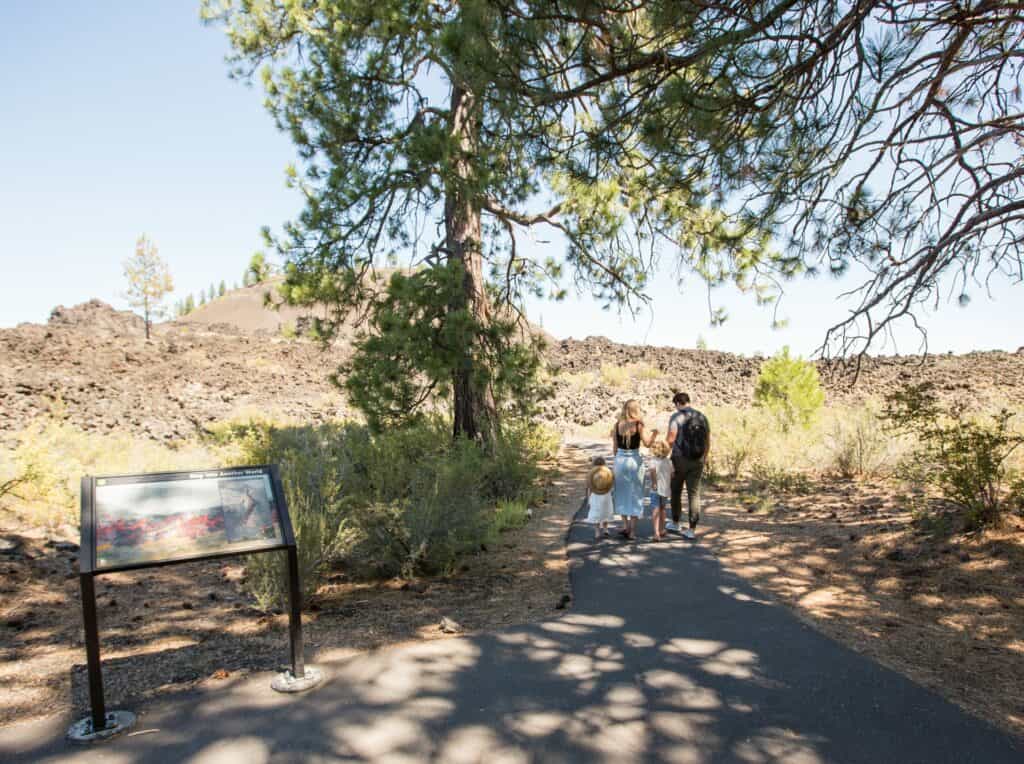 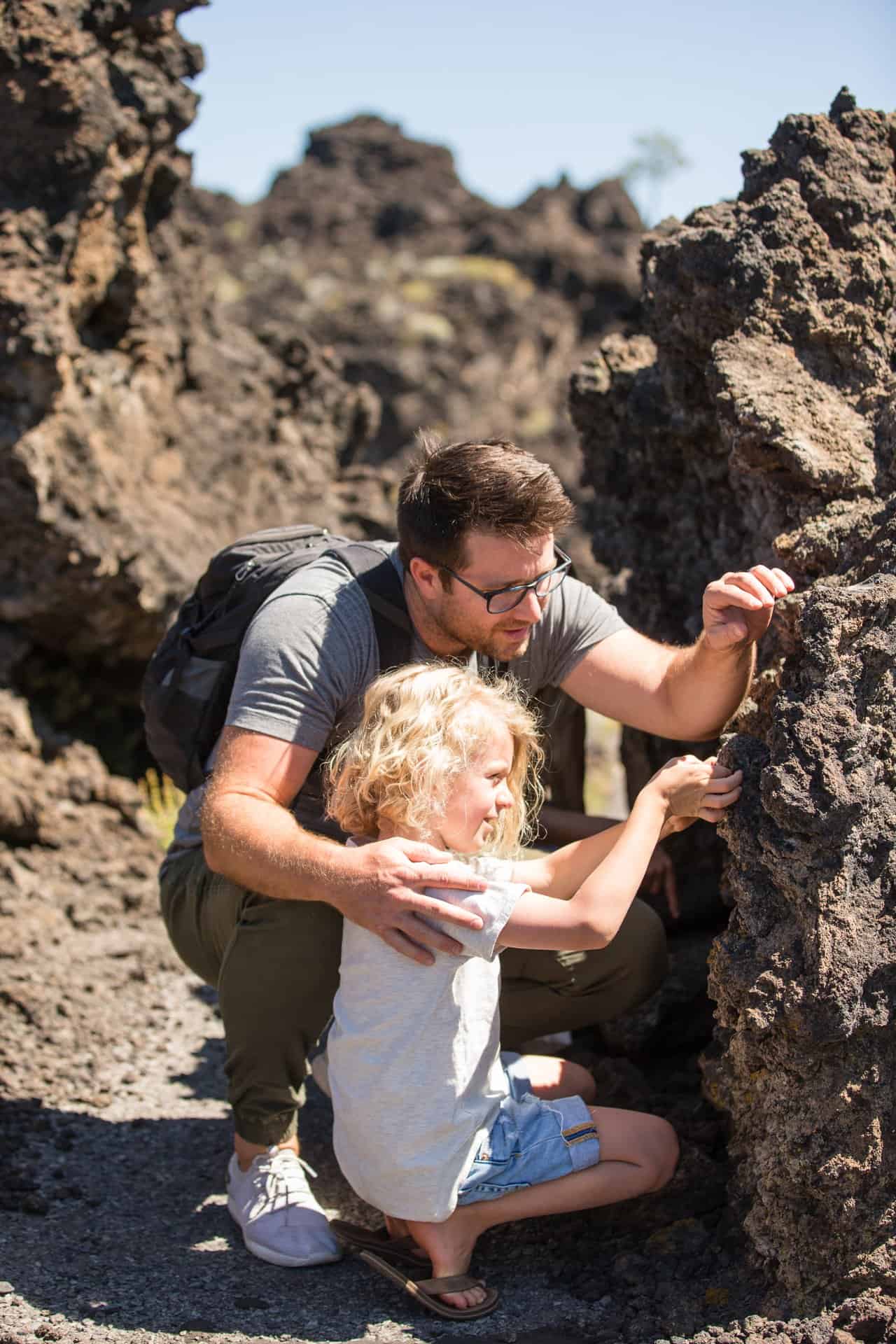 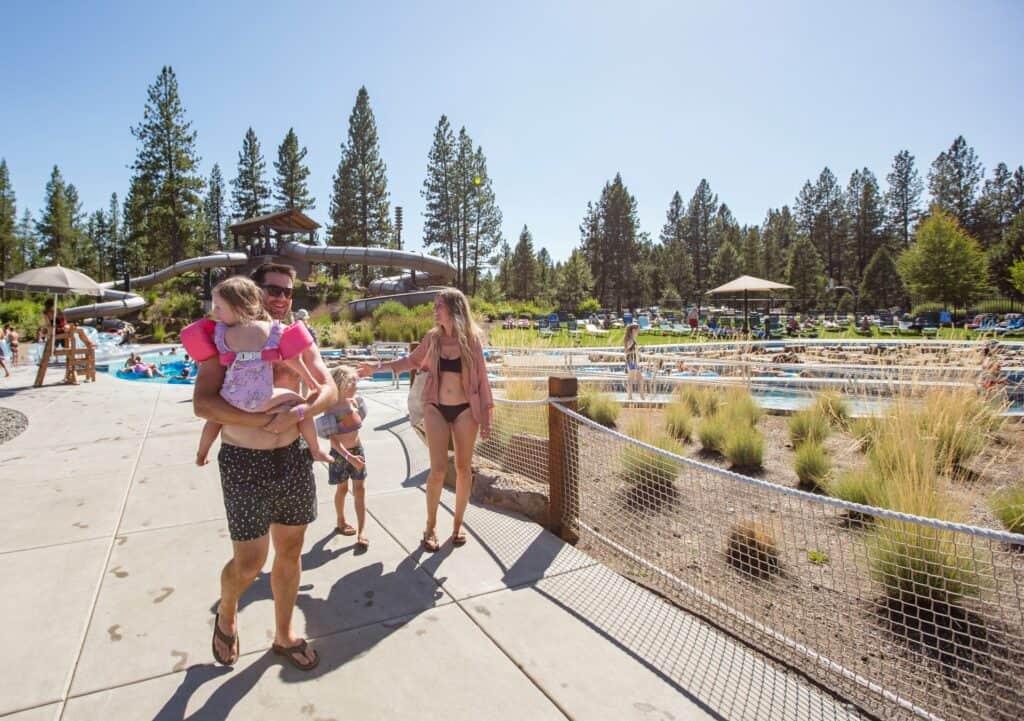